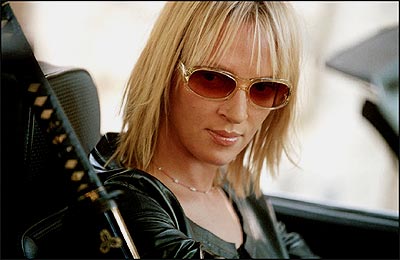 Character in Kill Bill, played by Uma Thurman. She was a member of the Deadly Viper Assassination Squad, her codename is Black Mamba.

Considered one of the deadliest women on the planet, Beatrix Kiddo, was an assassin skilled in martial arts, samurai swords and gun marksmanship. She had a love affair with the DiVAS' leader Bill. Beatrix and Bill's relationship eventually lead to her becoming pregnant with his child. Unclear of exactly what to do, she disappeared into Texas, becoming a single mother-to-be, taking the alias Arlene Machiavelli. As Arlene, she worked in a record shop owned by Tommy Plympton, who would come to take her hand in marriage. That was the plan, until her scorned lover and boss Bill reappeared and with the assistance of the DiVAS, killed her entire wedding party and put a bullet in the her head leaving her for dead.

The Bride was left comatose, and remained in an El Paso Texas hospital under the watch of Bill for four years. After awaking from her coma, she discovered a twisted orderly named Buck had been using her body as a sexual play toy. After getting rid of Buck, she immediately became an avenging angel of justice called simply The Bride, out to kill everyone even remotely responsible for the massacre that occured at Two Pines, but first she needed to obtain a really good weapon. The Bride went to the only man alive who could possibly make a weapon meant for her kind of revenge, Hattori Hanzo. He then made her a sword not only for her own revenge against Bill, but for his own karmic soothing.

The Bride tracked down the most notorious ex-DiVAS member Cottonmouth, aka O-Ren Ishii in Tokyo, Japan. O-Ren had risen to the top of the food chain as boss of the Yakuza and had her own army The Crazy 88 and her personal bodyguard Gogo Yubari to protect her. She disposed of them all and killed O-Ren Ishii, leaving only her assistant and translator Sofie Fatale alive to tell the tale to Bill. The Bride then returned to the United States where in Pasadena, California she took care of ex-DiVAS member Vernita Green aka Copperhead, who had made a domestic life for herself in the suburbs. After killing Vernita, she went out to the desert of Barstow, California to take out Bill's brother Budd. But Budd was prepared for her attack, and she was taken down with a blast of rock salt from a shotgun and sedated. Budd proceeded to bury The Bride alive in a local cemetery with the help of his strange pal Ernie. Budd then contacted fellow ex-DiVAS member Elle Driver aka California Mountain Snake, to let her know of the final resting place of Beatrix Kiddo. Budd intended to sell her The Bride's priceless Hanzo sword, and Elle Driver came in from Texas to get it. Elle however never really intends to pay him, giving him instead a briefcase full of loot hiding a real black mamba snake which will kill him when he opens it. After killing Budd, Elle is confronted by The Bride and they fight to the death. The end of their battle comes with the Bride permanently blinding Driver by plucking her only good eye out. The Bride leaves California and stops in Acuna, Mexico, to ask Bill's surrogate father and mentor Esteban Vihaio where Bill is staying. After a strangely warm conversation between the two, Beatrix continues on to confront Bill in his condominium at the Villa Quatro. Much to Beatrix's surprise she finds her lost daughter BB, alive and well with Bill. The Bride and Bill discuss the course of events that lead to that fateful day at the Two Pines Chapel and the two have a final showdown, where Beatrix ends his life by literally breaking his heart, via the legendary "Five Point Palm Exploding Heart Technique" she learned from Pai Mei. Beatrix takes her long lost daughter out of the home and leaves for a new future. The Lioness and her Cub are together again.