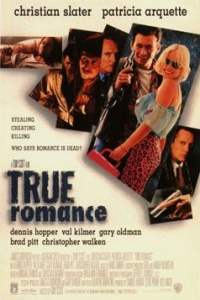 True Romance was originally an epic script entitled Open Road written by QT along with friend/co-worker Roger Avary back in their Video Archives days. It was later adapted into two separate movies, True Romance and Natural Born Killers. Tarantino sold the True Romance script to Tony Scott for $50,000 using the cash to fund his own directorial debut Reservoir Dogs. Tony Scott re-arranged the layout of the film and had Roger Avary re-write the ending. Tarantino's original ending can now be seen on the Special Edition DVD. Upon it's release in 1993 it was a box office flop, not finding true notoriety until the rise in popularity of Reservoir Dogs.

It's Clarence Worley's birthday and as a present his boss Lance has set him up with a young call girl named Alabama Whitman. The two spend the night together and when Alabama reveals her true feelings for Clarence it becomes clear that they've both fallen in love with each other. The couple marry and want to leave Detroit, but not before Clarence decides to get Alabama's belongings back from her ex-pimp Drexl Spivey. Later on, when they open the suitcase, instead of clothes they find a whole lot of cocaine. The lovers proceed to travel to Los Angeles where they plan to sell the drugs through the help of Clarence's best friend Dick Ritchie an aspiring actor. Unbeknownst to them, the mob (who Drexl worked for) is on their trail, the cops are wise to them, and they ultimately end up getting stuck in the middle of a highly explosive situation.