Celebrating 20 years of filmmaking, "Tarantino XX" is a 10-disc, 8-film celebration of Quentin Tarantino's cinema on BluRay (and DVD in some markets), wich plenty of exclusive extras, in a collector's box designed by Mondo. 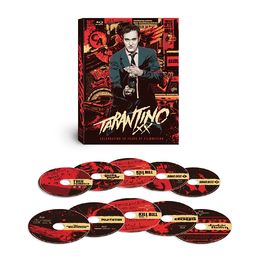 Over 5 Hours of Never-Before-Seen Special Features Include: Critics Corner (The Films of Quentin Tarantino In-depth critics' discussion piece exploring Tarantino's films that redefined cinema and the impact of one of the most influential writers/directors of our time), 20 Years of Filmmaking (Take a look at Tarantino's career from the beginning, with interviews from co-workers, critics, stars and master filmmakers alike as well as a tribute to his greatest collaborator, Sally Menke), Jackie Brown Q&A: A Film Independent at LACMA Event (Quentin Tarantino, Robert Forster, and Pam Grier reunite for an intimate and enlightening discussion about Jackie Brown. Moderated by Elvis Mitchell, renowned film critic and curator for Film Independent at LACMA series), A Collection of Django Unchained Trailers.