Sin City 2: A Dame To Kill For

The film's plot follows multiple storyline. One is based around A Dame to Kill For which follows Dwight (Clive Owen) and his former love Ava Lord (Rachel Weisz), who betrayed him and ended their relationship for a wealthier man. Ava now returns years later claiming her marriage is abusive and insisting that Dwight help her. After she frames him for the murder of her husband, Dwight, with the help of Marv, seeks to clear his name. Dwight's storyline in this film is a prequel to The Big Fat Kill, which occurred in the first film. It explains how Dwight came to have his "new face" and his connections with the Old Town prostitutes. Dark Horse describes A Dame to Kill For: "It's one of those hot nights, dry and windless. The kind that makes people do sweaty, secret things. Dwight's thinking of all the ways he's screwed up and what he'd give for one clear chance to wipe the slate clean, to dig his way out of the numb grey hell that is his life. And he'd give anything. Just to cut loose. Just to feel the fire. One more time."[3] Another storyline follows Nancy (Jessica Alba) as she grieves the death of Detective Hartigan, the man she had grown to love after he rescued her from That Yellow Bastard who had kidnapped and attempted to rape then kill Nancy when she was a child.

- A Dame To Kill For graphic novel. 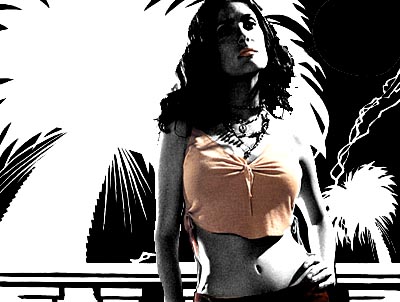