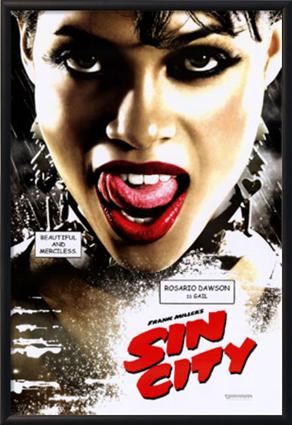 More On This Film

The concept for this film started in the Comics revolution of the late 60's with incredible artists like Frank Frazetta, Jim Steranko, Neal Adams, and Barry Smith. They knew anatomy, and they used photographs to compose their backgrounds. Pre-Anime, the characters began to "almost" move off the pages. Frank Miller came along in 1978. He helped to inaugurate the adult graphics novels-larger formats, better paper, brighter inks-coupled to nudity and R-rated dialogue. Some of this has been around since the late 50's, but the new format was gathering speed and Miller was in the vanguard.

Miller's graphic novel's about SIN CITY contained art in panels that broke down like very detailed storyboards. When Robert Rodriguez decided to court Miller and sell him on the idea of converting the graphics to digital video-Miller loved it. Their partnership went so far as to have Rodriguez dropping out of the Director's Guild so that he might be permitted to put Frank Miller in the credits as co-director. Rodriguez created a B&W world where color was used sparingly-and for great effect. Blood was white-or bright red. Some eyes were blue. Some hair was blond. Pale green and pale blue showed up on classic cars.

Rodriguez assembled a powerhouse cast. Bruce Willis was first up, to boost the sales of the production and the star power. He was excellent in the film-beginning to appear very Noir-very Chandler and Hammett-a modern Bogart. Using CGI and live actors, Rodriguez was able to do most of the work in his homegrown studio in Texas. Miller created a world part pulp-novel, classic cars-and part hyper-violent martial arts and splatter film. Everybody smoked, many of them drove a ragtop-they could shoot guns with both hands simultaneously-and women, regardless of how far they had fallen-were still treated with respect. More than an adaptation of Millers comic book art-it is literally his artwork brought starkly to life. The effect is original, violent, sexy, existential-and very effective.

The film worked off three Miller "stories"-and the best of the three-THE BIG FAT KILL-starred Mickey Rourke. He can think of this film as his return to the big time. He is brilliant. His character, Marv, is perfectly fitted for this new genre-and his acting, and the action he precipitates-blows all the others in the film out of the water. This may be Rourke's finest performance. He has been a pro boxer, as well as actor-and he needed that physical prowess for this role.