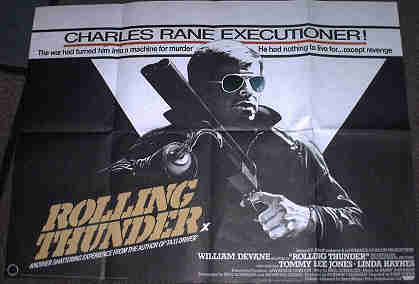 Sometimes, movies that have a good reputation and are considered essentials, just happen to keep quite a low profile. Movies, that for whatever reason, just aren't available on DVD or don't come on TV very often. But these movies usually are desired by fans worldwide, for example because they enjoy a certain cult status. ROLLING THUNDER is such a movie. It is an honor to present you a review of the film for the first time in the history of this website. A review of John Flynn's Rolling Thunder, the movie that inspired Quentin Tarantino to the name of his former video company Rolling Thunder Pictures. Special thanks to BlvdduCinema.com for providing a bootleg DVD for my viewing pleasure.

Major Charlie Rane (William Devane) just returned from Vietnam as a POW and finds his wife and son happy. While he has problems readjusting, fighting post-traumatic stress syndrome and the memories of torture, he also faces a divorce, because his wife wants to marry another guy. After his arrival, local residents donated a suitcase full of dollar coins to him as a welcome back gift. One night, a gang of thugs shows up at his house and forces him to give up those coins. As he refuses to, they torture him and put his hand into the garbage grinder, just when his wife and son arrive and they tell the thugs where the money is. But they kill wife and son before leaving, and Rane wounded on the floor. After he is somewhat cured, he goes out and seeks revenge, not telling the police who the thugs were. He is accompanied by an old lover named Linda, who joins him as he drives down to Mexico to shake up the killers of his family. This is not an easy thing to accomplish, and in the end he teams up with one of his former comrades, Johnny (Tommy Lee Jones) as they gear up and attack a whorehouse and kill everyone.

The movie was written by Paul Schrader and made after Taxi Driver, which was also written by him. This dramatic tale of Vietnam vets returned home, reminds me of First Blood, which was made far later. But Rolling Thunder is not mainly an action film. Actually it moves on quite slowly until it ends with a Peckinpah-esque finale with lots of shotgun fire and fake blood. Flynn directs Devane and Co through a film that slowly establishes the plot, which gives the audience plenty of opportunity to observe the character of Rane. He is an Air Force pilot, not a close combat expert, like Rambo. But he has survived through some tough shit and he is determined to take revenge for the murder of his family. All the while, that is what drives him, the only thing that keeps him going, because that's what's left to him: suffering. All throughout the film however, Rane is a quiet and pondering man, unable to take the chance and just take off with that nice blonde girl that so unconditionally attaches herself to him. Schrader did a wonderful job in illustrating this meaninglessness in Rane's life. And Rolling Thunder as a movie works so well in that, as it doesn't let you down on suspense either. There are plenty of Vietnam flashbacks, sudden outbursts of violence and a certain amount of indecisiveness on the part of the actors.

Rolling Thunder is a cult film not only because of the Tarantino connection, but mostly because it is remembered as a tough take on the post-Vietnam times and the violence that can erupt from these worlds that collide inside the minds of people who have suffered from the war and are put into a place they can't deal with anymore, usually falling victim to events that bring them back to Vietnam - in a figurative sense. I can recommend Rolling Thunder to everyone interested in critical 70s films, I would rate the film a 4 out of 5 stars. A film that's hard to get, maybe you can catch it on MGM pay TV or snatch a bootleg somewhere.