Quentin Tarantino FAQ. Everything left to know about the original Reservoir Dog

We're excited to announce the upcoming release of a new book on Quentin Tarantino by a good friend of ours, author Dale Sherman. The book, titled "Quentin Tarantino FAQ. Everything left to know about the original Reservoir Dog" will officially be released on March 10 and is already available for pre-order. Continue reading for more info and your chance to win a free copy of the book, signed by the author! 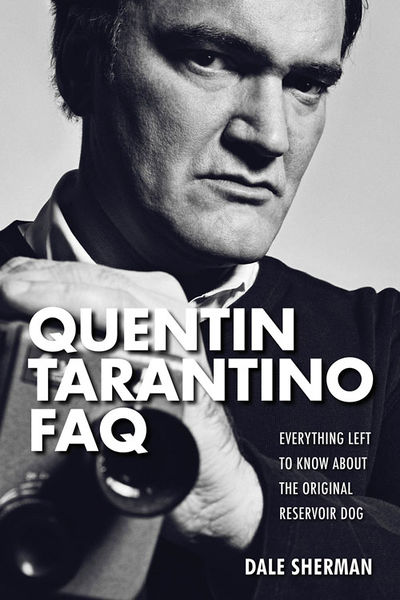 Quentin Tarantino is a man who came to Hollywood and didn't break the rules so much as make plain that he didn't even notice them. Making the films he wanted to see, Tarantino broke through with Reservoir Dogs in 1992 and then cemented his reputation in 1994 with the release of Pulp Fiction. As his fame grew, he spread his love for movies that are far from commonplace through his promotion of older films and theaters and by reviving the stalled careers of actors such as John Travolta, Pam Grier, and David Carradine.

Quentin Tarantino FAQ examines the movies directed by Tarantino, the influences on his work, and the inspiration he gave to others. There are also chapters on certain recurring elements in his films, from fake “product placement” to the music, actors, and even cinematic moments used. The book also reviews his work in television, the articles written about him or by him over the years, his acting career, his public battles, and some of the projects he abandoned along the way. It all comes together to tell the story of a man who forged his own unique path and helped shape the way movies are made today.

To win a free, signed, copy of the book, simply subscribe to the Triple Feature Foundation's movie newsletter at THIS LINK anytime before March 15, 2015 for a chance to win. Winners will be notified via email.