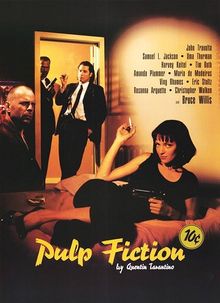 Here is the storyline of Pulp Fiction in chronological order. I don't recommend this for people who haven't seen the movie less than three times! It might contain a degree of interpretation in the interest of legibility.

Vincent Vega and Jules Winnfield are in the car discussing "carpool" talk (e.g. quarter pounder in Paris is called a Royale) They are going to an apartment to retrieve Marsellus' attache case and the property within, and to kill the occupants. It is a hit. There is a fourth man hiding in the bathroom. He bursts out shooting and miraculously misses hitting Jules and Vincent. Jules experiences an epiphany.

Vincent and Jules take Marvin (their man inside?) into their car to go to Marsellus Wallace's bar, but Vincent accidentally blows off Marvin's head, causing a very large bloody mess in the car. Jules calls his old pal Jimmie, and they drive there to find a way to get out of the unfortunate mess Vincent has gotten them into. Jules calls Marsellus, who summons Wolf (the fixer), and he is dispatched to Jimmie's house. Jules and Vincent clean up the car, change into those ridiculous shorts and t-shirts provided by Jimmy after they have cleaned off the blood and brain pulp from their bodies. They follow The Wolf to Monster Joe's Truck & Tow and the car and the body are safely disposed of.

Jules and Vincent go to a diner to eat before going to Marsellus' bar to drop off the attache case. Jules continues his discussion of the miracle he felt he witnessed, and that he is going to be leaving "the life". Vincent interrupts to go to the bathroom. Two psychopaths decide to stage a robbery at the diner where they feel they can score big, and hold everyone at bay with guns and threats of murder. They collect wallets, and are confronted by Jules when he refuses to give up the briefcase. Through intimidation, Jules gets back his bad mother fucker wallet, but gives the robbers his money. He does not kill them, he explains, because of this recent miracle he experienced.

Vincent and Jules go to Marcellus' bar (still dressed in shorts and t-shirts) to deliver their cache. They have to wait because Marsellus is talking to a washed-up palooka boxer named Butch. Butch is being paid off to throw a fight the next night. As Butch leaves, he and Vincent verbally tee off, but Butch backs down and leaves. Jules and the bartender are exchanging amusing looks with reference to Vincent's evening assignment. He is to escort Marsellus' wife, Mia, out for the evening. Vincent and Jules have talked about this before, while they were waiting to burst into the apartment on their hit.

They go a bizarre retro 50's club. They eat, talk, and enter a dance contest, which they win. Back at Mia's house, Vincent goes to the bathroom to try and figure out how he can leave without getting into trouble. While he is in the bathroom, Mia sings and dances around the room. She finds the heroin in Vincent's pocket, and thinking it is coke, snorts. She OD's and Vincent rushes her to his drug dealer Lance's house in hopes of getting help. With a giant hypodermic needle full of adrenaline, Mia is revived. Vincent takes her home, and they both agree that Marsellus never need know of the events of the evening.

Flashback sequence to the story of Butch and his father's watch and its travels as told by Butch's father's friend and fellow POW, Captain Koons. We return to the present, and Butch jumps up, ready for his fight.. However, instead of throwing the fight, he KO's his opponent, and kills him. He jumps into a cab and goes to the motel where his girlfriend is waiting. They make love and go to sleep. Marsellus is furious, and orders Butch found and killed.

Marsellus has put out a hit, and dispatched Vincent to wait for Butch should he return to his apartment. Butch does return, but as Vincent is once again in the bathroom, and is able not only to retrieve his watch, but to kill Vincent as well. Vincent's story is done.

Butch feels lucky. He drives away with a smile, listening to "Flowers on the Wall" on the radio, and literally bangs into Marsellus on the street carrying burgers and cokes. There is a bloody confrontation, and Marsellus chases Butch into a sleazy gun shop. The owner Maynard knocks Butch out with the butt of his shotgun, then calls his friend Zed, and then brings them both down to the basement,which we quickly find out is an S/M playground. Marsellus is chosen to be the victim first, and Butch is able to untie himself and flee. On the way out, he decides to go back and save Marsellus. He chooses his weapon from a vast array. It is a Samurai sword, and his glee is apparent. Marsellus is being raped by one of the men, and Butch saves him by slashing and stabbing the other guy. Marsellus is appropriately thankful and decides that whatever ill-will existed between he and Butch before, it is now a dead issue. Butch is free to go, providing he never mention this to anyone, or come back to L.A. again.