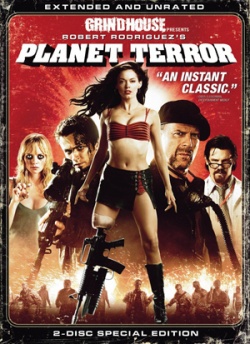 Cherry (Rose McGowan), a former stripper, runs into her ex boyfriend Wray (Freddy Rodriguez) in a night where a renegade military squad runs into trouble with an arms dealer (Naveen Andrews) about biochemical material, that subsequently gets released into the air, turning people into infected sickos. At the same time, Dr Block (Josh Brolin) and his wife Dakota (Marley Shelton) start their night shift, just as Wray arrives there with Cherry, who lost her leg in a sicko attack. On the forefront of the impending battle against hordes of sickos is also Sheriff Hague (Michael Biehn) and his brother JT (Jeff Fahey), who runs a bar bq restaurant that evolves into a hideout for the adventurers around Wray. When the military captures the gang, some things become inherently clear, and not only do we get to find out who killed Osama bin Laden, Cherry also gets a machine gun for a leg, JT shares a secret barbeque recipee with his brother, and Dakota Block's daddy kills her husband, when all hell breaks loose....

I decided not to put too much effort into the movie part of this review, since this is already my third review of one and the same film essentially. Scroll down for the DVD part. Let me just say this, Planet Terror, in this extended cut on DVD, is still, and maybe even more so, one hell of an entertaining flick. Styled to the last detail, it just works. There's nothing Tarantinoesque about it, no word is wasted, no scene is there for its own sake, there's no playing around with cinematic repertoire. Rodriguez' film is inherently to the point, nothing is there without the implicit intention and everything has an important place in the story. You probably couldn't cut anything out of the script without damaging the film, because the script is already cut down to the bare essentials, which makes the film so grindhousey and sharp on the edges.

Robert Rodriguez is known to put great ideas into his DVD releases. The Sin City Recut & Extended DVD is not only one of the greatest DVD releases in recent years, it's also tons of material for your dollar. Now Planet Terror is supposed to be a special collector's edition, but what it is really is a standard release with the standard amount of extras I would expect to be sold to the true fan. Let me go through the DVD's features and give you a verdict.

AUDIO: The sound kicks butt quite a bit. All the action makes your speakers rumble and the effects are nicely emphasized by this, I would say, awesome audio track. What's particularly cool are the gore effects and the explosions. Rodriguez is an effects whiz, so it should not come as a surprise that he pulled out all the could to make this a bonanza for all kinds of shit happening, audio-wise.

VIDEO: Meant to look cheap and worn out, this print is a stunner nonetheless. Lots of color, great effects and cinematography that likes to play with your visual senses. A great picture considering the artifical worn-out-ness, and all that shot in HD, that means it's sharp as a motherfucker, and every little scratch and crackle is a tickle for the cineast.

While the Death Proof DVD offered a lack of audio commentary, Planet Terror not only comes with a Robert Rodriguez audio commentary but also with an audience reaction track, where you can watch the movie with a live audience so to say, in case you have to watch the DVD alone, here's a good way to keep company. That's not only pretty funny, but to me, part of the Grindhouse experience was to see how others (friends etc) react to the film. So this is especially interesting.

There's some international poster art on the first disc that also holds the movie, which, fortunately, starts with the Machete trailer. His favorite 10 Minute Filmschool is on there, mainly focussing on the machine gun leg, and some general tips on how he saved money (as usual) and how he was generally awesome. Then there are two little features (about 10 mins each) about the "badass babes" and the guys of Planet Terror, that consist of some interviews with the actresses and actors and it's a bit about the characters they play. "Casting Rebel" is a 5min bit about how/why he cast his youngest son in the movie, and what problems and fun came along with that. There's also a longer feature about the stunts, which is very interesting considering for example the large explosion towards the end of the movie, or some of the more elaborate stunts the actors and the team had to pull off. The last bit is called "The Friend, The Doctor and the Real Estate Agent", which is essentially a little feature about some of his friends he casted in the film, very amusing.

One of the most original extras on a DVD in a long time, is the audience reaction track that's included on disc one. Basically, that's an audio track that makes you think you're sitting in a packed theater with lots of people. Sometimes it's a bit overdone, but basically this feels like watching a daily comedy soap opera on Tv, with all the on-command laughter. I think it works pretty good with Planet Terror.

The core piece is yet another very informative and entertaining audio commentary by Rodriguez, who takes the viewer through the entire movie with mostly screen-specific stories and anecdotes about the film, the story, the script, the production and so on, while referring to some of the other extras on the DVD for elaboration, which I think is very useful. Rodriguez is not a stand-up comedian though, and his commentary is rather technical and, while not monotonous, not as sparkling full of excitement as lets say Tarantino's commentaries (in the rare instances you can find those). All in all a must-listen to though.

At this point, it is no longer necessary: reading this, you are already familiar with my (and our, to the most part) opinion of this film. A great piece of work, a showcase of Robert's filmmaking talent, a grindhouse flick that just works like a charm, and doesn't try to be epic or cult or art. This is a fun flick par excellence, and as such probably his best work so far. The DVD does justice to the film by offering enough extras to keep you busy for some time. The commentary and the little featurettes leave almost no question unanswered, and you can still consult the official companion book for more, or wait for the Grindhouse DVD to come out this year. A great video transfer, if you look past the artificial aging they applied to the film, rumbling and rocking surround sound. This DVD is worth every penny and I don't see a reason why anyone should regret that purchase. It's "go, go", not "cry, cry".