Once Upon a Time in Mexico soundtrack 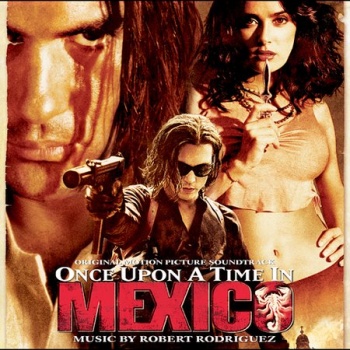 With a score composed and performed largely by director Robert Rodriguez, the soundtrack to ONCE UPON A TIME IN MEXICO contains, as you'd perhaps expect from a film whose title nods to Sergio Leone, more than its share of Ennio Morricone musical stylings. This is revealed most particularly in the form of tracks such as "Guitar Town," with its echoing, stinging guitar sound that's lifted straight from the Morricone playbook. But there's more to this superlative soundtrack than mere imitation.

Brian Setzer contributes a fine instrumental take on the traditional "Malaguena," while, not to be outdone in the instrumental stakes, guitarist Marcos Loya performs a flamenco-style track on "Yo Te Quiero." Heavy on tension-filled atmospherics (you can almost see the sweaty brows and narrowed eyes), ONCE UPON A TIME IN MEXICO is a worthy Leone/Morricone pastiche and a fitting accompaniment to a proudly over-the-top film.