Once Upon A Time In Mexico reviews 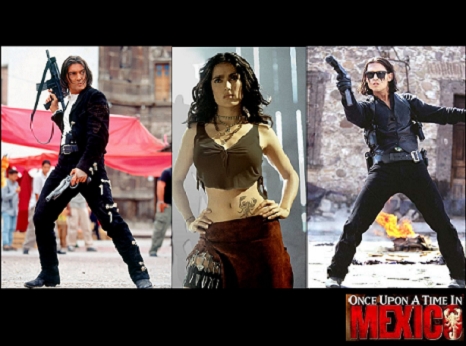 ONCE UPON A TIME IN MEXICO Review #1 by "Biohazard"

This is a stylish movie in the same vein as his earlier Desperado and El Mariachi, but it's not quite as good. One of the problems is the plot. It's convoluted even for an action flick. Desperado was easy. A drug kingpin who El Mariachi (Banderas) was after for personal reasons controls a town, and our hero has to fight him. Once Upon a Time in Mexico, however, is much more political, with the president of Mexico in line for assassination. A rogue CIA agent (Johnny Depp), instead of trying to stop it, is trying to profit from it by asking El Mariachi to kill the leader of the rebel army in charge of the assassination (Gerardo Vigil), who also happens to be the man who killed El Mariachi's wife (Salma Hayek). Confused? I still am, and I watched the thing. He also sets a retired FBI agent (Reuben Blades) after Barillo (Willem Defoe), who is the drug kingpin who had the agent's partner tortured and murdered. So, basically, everybody's supposed to die, and the CIA agent is supposed to get something out of all this? I actually thought I understood it a little bit until I tried to explain it.

While the plot is very murky, the action set-pieces are great. Unrealistic, but they usually are in movies like this. That's part of the charm. Banderas falls of a church balcony, shooting upward and killing his assailant, then lands on his back and just rolls over and gets up. You don't watch these things for the realism, however. You watch them for the style. Rodriguez has style in spades, and the scenes are very enjoyable to watch. Head shots, leg shots, blood flying every where. Bodies jumping, in a graceful pirouette as the bullets spatter, it's all great. Especially good is the shootout in the church, especially when they all pause to let the little old woman who hasn't reacted to this at all get out of the line of fire.

There's just not enough of them. Instead, Banderas broods. Then he broods again. I guess he has to brood a lot, because Rodriguez has to justify Hayek's salary. She only appears in flashbacks of the good times, and the time where she is killed (which is repeated a number of times). She's the only beauty in this tough film (there is one other woman, Eva Mendez, but while she's quite beautiful, she's tough as nails), so we need the occasional interlude. When Banderas isn't brooding, Depp is plotting. Occasionally, Defoe is plotting. Even more occasionally, Blades is plotting. Then we get back to Depp plotting. Do you get the idea that there's a lot of plotting going on? Everybody double-crosses at least one other person in this film. 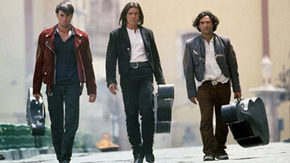 So much for the plot. How's the acting? Given the nature of the film, it's actually quite good. Banderas was born for this role, and it's a shame he doesn't do things like this more often. He might actually make a name for himself. He broods quite well (despite the fact that I think he's made to do too much of it, he's very good at it). Hayek doesn't do anything to really justify her being second billing in the movie, but that's hardly her fault. She's barely in it. Depp is a virtuoso as usual, too bad his character is completely incomprehensible. He acts insane at times (like his first scene which begins a running joke about his favourite dish down in Mexico). He's hardly undercover (he wears a "CIA Agent" t-shirt at one point) and he seems superfluous to the whole thing. It's only Depp's acting which makes his role even watchable. Nobody else is given much to do, though I have to single out Mickey Rourke as really annoying. His character is even worse. That may be because I just don't like watching Rourke, however. I also have to mention Cheech Marin]. It seems like he's in every Robert Rodriguez movie (though I don't know about the Spy Kids franchise), and every time he meets a bad end. One's given a bit of hope in this one, but to no avail. He plays his part really well, and I started to feel sorry for him when I realized that there's no way he's going to survive. It's sort of like Steve Buscemi in a Coen Brothers movie: no chance. It's actually quite funny.

If you've followed the El Mariachi series, then it's worth it to pick this one up. The action scenes are worth it if you're already a fan. Just be prepared to be puzzled by the plot. This certainly is not a good place to start your Rodriguez journey, however.