My Name is Modesty 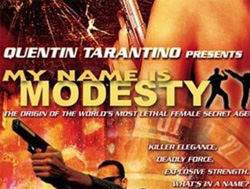 Miramax released this film straight-to-DVD, a cheap production that was made so Miramax wouldn't lose the rights to the novel, which is a favorite of Tarantino's. Most of the DVD releases (see below) bear the "Tarantino presents" banner. The novel this is based on is the book Vincent Vega is reading in the bathroom, for example, but also mainly the comic strips by Peter O'Donnell. The Tarantino & Scott Spiegel interview on the DVD is a must-watch.