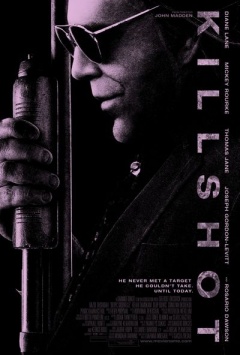 Killshot is a film made in 2006 by John Madden, that originated from the Miramax years. It is based on a script by Hossein Amini, and has undergone quite a few changes. Not only has the release date been postponed several times over the least 2 years, the film itself also has undergone many changes, such as reportedly having lost footage including Knoxville's character. Quentin Tarantino, who at one point had been credited as the Executive Producer, is no longer associated with the movie. Early trailers still carry his name.

Two innocent bystanders witness a crime they weren't meant to see, and are then subjected to being hunted down by the killers.