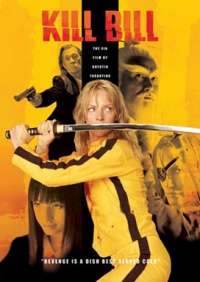 Kill Bill was created as one film and then released as two volumes. However, it is considered to be one film (the entire saga has also been termed The Whole Bloody Affair). The film in its entirety is divided into ten chapters. The first volume consists of the first five chapters. The second volume is the last 5 chapters. While Volume 1 is a no holds barred, violent Grindhouse Revenge thrill ride, Volume 2 is longer in running time and slows the breakneck speed down to give viewers a more in depth look at the characters Tarantino created. On another level, Volume 1 has a more Asian Kung Fu-Samurai inspired feel while Volume 2 plays more like an American/Spaghetti Western.

Tarantino decided to release a slightly altered version in Japan and some other Asian countries, showing a number of additional scenes of violence, and a full color version of The House of Blue Leaves massacre. The alterations in Volume 2 are only minor recuts and hardly contain major additions.

The Bride, a former professional assassin and pregnant, is shot and left for dead at her wedding, by none other than her former boss Bill. She wakes up from a coma after five years, without her baby, and sets out for revenge. After regaining strength and aquiring deadly weapons, she tracks down Bill's accomplices, at the same time her follow colleagues, and kills them one after another. Among them are O-Ren, who in the mean time became the head of the Yakuza, Vernita Green, who is now a housewife, and Budd, Bill's brother, who lives a shitty life in a trailer home. Not until the very end, does she get to face her nemesis, to take revenge for all that he has done to her, only to find out about a surprising truth. But she will Kill Bill.