AN INTERVIEW WITH BO SVENSON

Legend Bo Svenson, playing 'Reverend Harmony' in Kill Bill, gives us some information about his involvement in the movie and his future projects. I had the honor to personally ask Bo some questions.

Visit www.bosvenson.com if you want to read more.

QT Archives: Here we go, some random things I came up with that might be interesting for us fans. How did you get involved in the project?

Mr Svenson: Quentin offered me the role in june 2002.

QT Archives: You played lots of cops before. Have you ever played a similar role as a preacher before?

Mr Svenson: The Preacher (Uma is The Bride, Samuel L. Jackson is The Organ Player, Chris Nelson is The Groom).

QT Archives: How do you think about the movie, will it be a big hit, and why?

QT Archives: Most of the people on the internet only know the very first draft of the script, which does not mention any surviving wedding participants. Does your part involve happenings before the massacre as well?

QT Archives: Do you know if the sequence you're in, comes at the beginning or at the end of the movie?

Mr Svenson: In the beginning, later, and in the middle.

QT Archives: What are your next projects? For example, fans loved you in "Walking Tall", do you think there could be a remake?

Mr Svenson: There is talk of both a remake and a sequel.

QT Archives: How good is "viking" coming along?

QT Archvies: What's it about?

Mr Svenson: The discovery of America by vikings 500 years before columbus.

QT Archives: How high do you consider the level of violence in Kill Bill according to what you've seen?

QT Archives: When did you establish your own website?

QT Archives: Not many actors do have their own. How did you get the idea, and do you think other celebrities will follow that example?

Mr Svenson: Fans started mine for me.

QT Archives: There will be a Kill Bill computer game. How do you think about that?

QT Archives: Would you like to appear in that?

QT Archives: Anything you wanna get out (to those thousands of movie lovers who will float into theaters next year)?

Mr Svenson: Working with quentin is the high point of my 35 years in hollywood. He is the man. 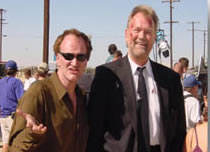