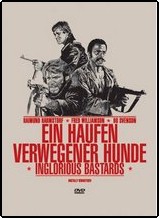 This is a review of the film and the German DVD release by Koch Media (which is very similar to the UK release). Please note that the US release differs in extras but may similar otherwise. Click here for a review of the US Region 1 release.

Occupied France in 1944: A bunch of American soldiers, each of them convicted for minor crimes, desertion or even murder, are on their way to being shipped home for court martial, as their truck breaks down and they are attacked by a German fighter plane. Many die, including military police that escorted them, and they escape. Seeking a way into distant Switzerland, the diverse group of cut-throats is now on the run, behind enemy lines, chased by the military police. On their journey, they pick up a German deserter, almost get killed by a platoon of Wehrmacht women and struggle with internal conflict, only to end up being mistaken for a team of special forces paratroopers, sent to capture V2 rocket parts from a German armored train. Seeing no way out, they take up this mission. Along with the French resistance fighters, a special forces Colonel and their own sense for survival, they embark on a crazy mission to blow up a bridge and render the Nazis' rockets useless. 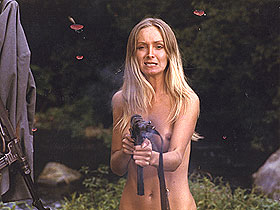 Inglorious Bastards, in fact the original title before it was changed to its current Italian title which translates to "that damn armored train", is one wild ride. It is Force 10 From Navarone with a twist, or The Dirty Dozen with nudity and a shot of blaxploitation. While the story is a straightforward men on a mission flick, heavily inspired by American blockbusters, it adds its own flavors to the genre and makes for a very entertaining adventure/ww2 film. Not only does the movie boast one hell of a cast, from Fred Williamson as some kind of 'GI Shaft' to Bo Svenson as a military officer, Raimund Harmstorf as a German called Adolf and Donald O'Brian as an SS commander, it also features outstanding stuntwork and action scenes, a little lovestory subplot, a group of nude bathing female German soldiers with machine guns, and lots of racism and politically incorrect dialogue as well as Italy's first usage of a steadicam! Enzo Castellari manages to direct a no holds barred action adventure that looks great, sounds great (Francesco de Masi's score may not be anything memorable but works perfectly) and is entertaining, too. Sure, there are a bunch of plot holes despite the five people who worked on the script, and the film does not hold up to either its inspirational sources, but it is a classic in its own right, and maybe even a masterpiece among its genre brethren.

I had seen this movie years ago on German TV, heavily censored (the entire rescue mission subplot in the Nazi castle was missing) and in atrocious quality, but now, without having to illegally download a bad rip of the overpriced Japanese import DVD, movielovers are finally able to enjoy this classic on a DVD that once again shows, how much love Koch Media's producers put into genre films like this. Christian Bruckner, the mastermind behind all previous Koch Media spaghetti western releases and genre movie buff, produced this great DVD and it does justice to the director's work and excels like seldomly DVDs of niche films like this one do. 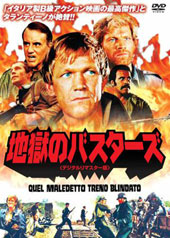 The visual quality of this disc is plain awesome. A gorgeous widescreen transfer with rich colors and lots of sharpness, no print damage and minimal visual glitches make this cinemascope beauty fit for your big screen (if you have one). The movie comes restored and remastered in its uncut version, leaving no room for complaints. The audio quality is great, too, and while just stereo, is way enough for a film old like this one. Koch Media offers the German dub, the more or less original English track and the Italian track as well. The English and Italian tracks are the complete ones, the German track switches to Italian numerous times for scenes that have never been dubbed into German. During those scenes, German subtitles come on.

Bruckner and his team also came up with an exclusive 47 minute making of montage of interviews (Italian with German subtitles, which is unfortunate for English-only speakers) and a little booklet (in German), as well as some rare artwork and the original Italian movie trailer.

If this is the first time you get to see this movie, you're in for a treat. It is one great exploitation flick with almost everything you could wish from a men on a mission WW2 movie. The DVD offers the probably best presentation of this film ever, and thanks to three language options also makes a great import if you live outside Germany. It is nice to see genre movies treated like this on DVD, more companies should see this as a good example!

Including an excerpt from the interview between Tarantino and Enzo Castellari (US DVD only!)

Thank you for reading, please enjoy our continuing series of exploitation and cult film reviews and support us by using our Amazon links. --Sebastian 14:53, 10 June 2007 (CEST)