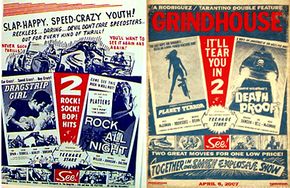 The main concept that inspired the idea for GRINDHOUSE was a double bill poster for the American International Pictures films Rock All Night and Dragstrip Girl. Both Robert Rodriguez and Quentin Tarantino owned copies of this poster and it later also became the blueprint for some of their own Grindhouse theatrical posters.

The two films that influenced Grindhouse the most tonally and genre wise was Sergio Martino's giallo thriller Torso and Lucio Fulci's zombie film Zombi 2. These two films were what Robert Rodriguez and Quentin Tarantino patterned Grindhouse's two films after. They wanted to give audiences the same kind of experience with Planet Terror (The zombie film) and Death Proof (The thriller).

The fake trailers for GRINDHOUSE were inspired by the exploitation trailers that would play in between and in front of features at Grindhouses and Drive-Ins in the 50s, 60s and 70s.

The intermission fast food/snack bar ads and age restriction cartoons featured in Grindhouse were also a regular staple of double features. They added a fun light hearted touch to the night's wild experience.

Low budget Exploitation Films in the 60s and 70s would usually be distributed with a limited number of prints. This meant that only a few copies would make their way from one part of the country to the other. When a film print premiered in New York City it would be in great condition. But after many months being shown in different theaters, different states, on different projectors, the once beautiful celluloid reels were worn out and beginning to decay. For their films, both Robert Rodriguez and Quentin Tarantino purposely added bad splices, sound problems, alternate title cards and discolorments to give their films a more genuine Grindhouse theater aura. Quentin Tarantino referred to these as "Frankenstein" prints, made up of a mixture of new and old celluloid images.