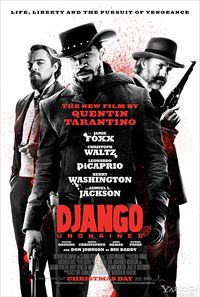 Django Unchained is a 2012 action-adventure movie written and directed by Quentin Tarantino.

In the American South, two years before The Civil War begins, a slave named Django is set free by Dr. King Schultz a German bounty hunter so he can help track down some criminal brothers/slavers who had owned him previously. After their initial team-up, the new friends continue to ride along together during which Dr. Schultz teaches Django how to be a proficient professional outlaw catcher and deadly pistoleer. When Schultz later learns of Django's estranged slave wife Broomhilda, who was sold off to a wealthy plantation owner named Calvin Candie, the two men hatch a plan to infiltrate Candie's estate and rescue her.