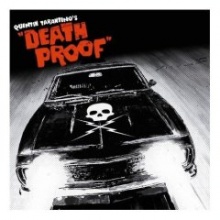 "Quentin Tarantino's Death Proof", out by Maverick records. Also available as a special edition with booklet and special packaging, and as 12" vinyl as well as 7" picture disc. Scroll down for links and a complete chronological list of all tunes played in the movie, including those not on the CD.

Song not on the CD

The complete soundtrack in chronological order

This list was compiled by Forum members of our community