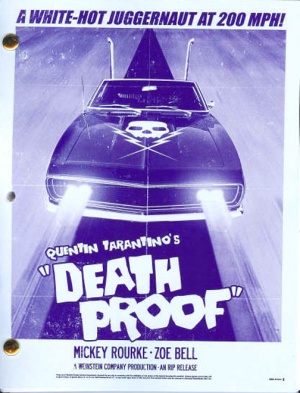 Stuntman Mike: I could drive this baby into a brick wall at a hundred and twenty-five miles an hour, just for the experience

What a ride! Quentin Tarantino is back, and for real, too. Death Proof is an instant grabber, it puts you in a nasty shitty seat of some old around-the-corner movie house. There's popcorn all over the place, it smells like beer and there's a couple next to you making out. You paid five bucks to see this crappy movie you've never heard of but you'll get to see the other movie, too, that plays right after it. Tarantino takes his time to establish some of the greatest characters he's ever written: a bunch of chicks going out on a weekday night, talking about this and that, ending up in a shitty bar. You get to love these characters, they jump right off the page. But there's this creepy guy with a scary car, too. And you know this will not end pretty - and it sure as hell does not. Let me add some criticism right here: The script is two parts, each dealing with Stuntman Mike killing or trying to kill hot chicks with his car, but from reading the script, I don't think the second half of Death Proof can live up to the great characters and wild surprise and mood set up in the first half. It might depend on some of the action scenes and Ms Bell's acting to see if it works out better than the first couple scenes. Anyways, back to the good stuff. Death Proof is full of Tarantino, aside from the fact that he will be playing the barkeeper that you've seen on the lobby cards that we posted on this wiki. There's great dialogue about nothing that's important for the plot, there's people cursing, drinking, killing, screaming, smoking red apple cigarettes and listening to imaginary radio stations playing Tarantino's own favorite sound. What I loved about the writing is how great Tarantino managed to put himself into the heads of a bunch of crazy ladies and have them talk the way women talk, talk about things women talk and behave just like women talk. These days, you don't see too many good characters and dialogue in movies anymore, well Death Proof is going to change that, because when I was reading this, these characters were alive, they were real, and I was sad about what happened to them. What I found particularly interesting about the script is the way it was written - from a technical perspective. It's not your usual, dry, descriptive, screenplay writing style. There are screen directions but you'll read remarks about women's asses, particular attitudes, moods and when you read it, you'll notice that this actually is more like a transcript. Yeah. The script reads like somebody who loved the fucking hell out of this movie, sat down and wrote what happened on screen, adding his personal loving to the text. To get back to my initial comments about the second half of the movie, I kind of feel that the climax of the film will be reached about 45 minutes into the film, with the other 45 minutes being a lot crazier, but the surprise is gone, the mood will be set, there'll be new characters and the setting has changed. It will still rock, no doubt, and from the script, let us not judge the final product which we'll see in April, but that's what I noticed about the script.

Bottom line? Wow, I can't wait to see this on the screen! It will be wild, it will be crazy, it will be rated R (there's some things in the script that I'm not sure if they're gonna end up in the film the way they are, but let's hope for as much raunchyness as possible), and it will be a lot of fun. Too bad I couldn't get my hands on Robert Rodriguez' script, but rest assured, Grind House will rock the box office!