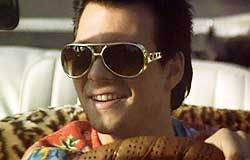 Culled from Tarantino's script Open Road and his incomplete short film My Best Friend's Birthday, True Romance was the first script sold to finance his directorial debut Reservoir Dogs. Tarantino actually played a prototype of the character in My Best Friend's Birthday, even lifting lines from the character for Clarence Worley. Worley is admittingly Tarantino's most autobiographical character.

The character is an out and out Elvis Presley fan going so far as to say he'd fuck him. Throughout the film, Clarence is mentored by a vision of Elvis (Mentor) who seems to visit him in moments when he's in the bathroom. Clarence works in a comic book shop, his boss hooks him up with a call girl named Alabama Whitman for his birthday. Showing up at the movie theater for a triple feature of Sonny Chiba films, Alabama soon plays the part but finds herself falling in love with Clarence for real. She eventually professes her love to Clarence, and he returns the love.

The couple get married, but the Elvis conscience coerces him to sever Alabama's ties with her past for good, by killing her pimp Drexl Spivey. Clarence confronts Drexl Spivey and murders him taking what he believed to be Alabama's clothes, instead turns out to be mob owned cocaine. Clarence gets help from his estranged father ex-cop Clifford Worley, and introduces his new wife to him. Cliff lets them know that the coke was indeed mob owned, and insures them the cops won't be looking for them. He gives them a few dollars to get out of town and they take off for Hollywood to meet up with Clarence's friend Dick Ritchie who has connections to sell off the coke. But the mob follows the couple, and tracks down the hotel Clarence and Alabama are staying in. Alabama fights for her life alone against a hitman named Virgil while Clarence is out. Later, Clarence and Alabama meet Dick's connection in Lee Donowitz and they get caught in a mexican standoff between the cops, the mob, and Lee's men. Barely surviving the crossfire of bullets in the wake of the standoff, Clarence is blinded in one eye, and at the end of True Romance it's shown he and Alabama have a child named Elvis. 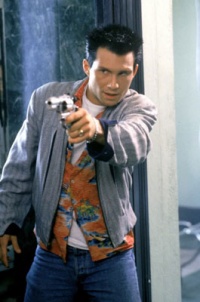