Difference between revisions of "Bunch of Basterds"

Empire Magazine - March 2009 (empireonline.com). This is a transcript of the article for people outside the magazine's availability reach. Please visit their website and subscribe to the magazine if you can.

The Basterds are a hand-picked bunch of tough guys who chase down Nazis and scalp them, a practice that has given their leader, Raine, his nickname. "The idea is that they're doing an Apache resistance against the Nazis," says Tarantino. "It's taking the idea that the Jews are acting like the Apaches in a no-win situation. The idea is to terrify the Nazis, get inside their minds."

Aldo Raine is an American hillbilly who has recruited a crack team of Nazi killers called The Basterds, and who joins forces with the British to carry out Operation Kino. "Brad's wonderful", says Tarantino. "We've wanted to work together for a long time and this was just the right one. After I finished the script, two days later I sent him a copy. He loves Aldo so much that he's pretty much in character all day. When he's on set, he's Aldo. He doesn't really break character."

Shosanna is a Jewish girl who escapes the SS and moves to Paris, where she assumes a new French identity and becomes the manageress of a small cinema. "Melanie just came in and auditioned," sais Tarantino, " and I thought she was terrific. She's a wonderful actress. She has a lovely emotions-at-the-ready quality. She completely understand Shosanna, in her soul."

Zoller is a German sniper who is being celebrated in Josef Goebbels' latest propaganda production, Nation's Pride. He falls for Shosanna, and tries to persuade Goebbels to hold his premiere in her cinema. "They make reference to Zoller being the German Sergeant York," says Tarantino. "But also he's a little bit based on Audie Murphy (the GI who became a Western star). He's about to become a movie star."

Fenech is the brains behind Operation Kino, a plan to sabotage Goebbels' big premiere. "Mike let it be known that he's an admirer of my work," says Tarantino. "He's also a Word War II expert. And he's a terrific character actor, so I talked to him about playing an older British general, modeled after the older George Sanders."

Colonel Hans Landa of the SS, aka The Jew Hunter

Landa is the suave genius of the SS and a celebrated Nazi. Hitler has personally put him in charge of ridding Occupied France of Jews. "If I hadn't found the right Landa I would have pulled the plug on the movie," says Tarantino. "Landa's a linguistic genius, so I had to find somebody who was a linguistic genius, because half of his scenes are in German, the other half is in French. And there's also a huge scene in English, so he's actually got to be able to do my dialogue in English as good as the German and as good as the French."

Hicox is a British movie buff sent behind enemy lines to carry out Operation Kino. His contact there is Von Hammersmark, a German film star. "I like the idea that it's the power of cinema that fights the Nazis," says Tarantino. "But not just as a metaphor - as a literal reality." 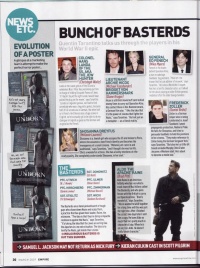