An interview with Sydney Tamiia Poitier

A Conversation with Sydney Tamiia Poitier

Sydney Tamiia Poitier: Do you mind if he does my hair while we....

Tarantino.info (Sebastian): No not at all

Sebastian: Let's get to the point. People say Quentin has a foot fetish. What do you say? (laughs)

Sydney: I say Quentin definitely has a love of and a passion for women's feet. I don't know if I'd say fetish, coz I don't know if he choses that word for himself, but.... 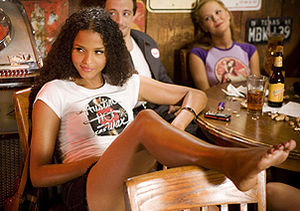 Sebastian: Didn't he mention it once on the Tyra Banks show?

Sydney: Well she said, because we just went on there recently, and she brought it up again and he that was your word. So it's Tyra's word, foot fetish, but I think he has a really deep appreciation for women's feet. Definitely.

Sebastian: Did you ever return that favor?

Sydney: Here's my chance to make fun of Rose's hair? or Pam's hair? Uhm... you know there's actually, there's a scene in the movie that we shot, Rose and I, and it was purposely shot to be cut out, to be one of the missing reels, and it'll go back in and in the DVD and it's gonna go on the international release, but, I won't tell you what it is, people can see it, uhm, but it explains why Jungle Julia and Pam hate each other so so much, and where all of that comes from. It's a really funny story.

Sebastian: Part of it was in the movie, where she says it goes back to high school and all that stuff...

Sydney: It does, yeah, she told part of it to Stuntman Mike

Sydney: Yeah, but I don't think she tells all the good details of it. (chuckles) It gets better.

Sebastian: Your character is kind of a music buff

Sebastian: Is that realistic? Do you know a lot about music?

Sydney: I would definitely consider myself a music lover. I don't know if I'd go so far as to say I'm a music buff in terms of, like, my knowledge of music but music is a big part of my life, and I love all different kinds of music, and I play in a band actually, I play drums. That's my guitarist right there (points..), and my makeup artist Mary. so yeah, I obviously, I love music.

Sebastian: So did Quentin have to take you through his record collection like he does all the time, or did you know most of the songs?

Sydney: No I didn't, I mean, Quentin has like such impeccable a taste in music, it's crazy. He's like a real, I'd say music is his second love, to film. So a of lot of the songs he knows, he knows like so many different obscure recordings and cool versions of songs, like the "Baby it's you" I think it's really like a Shirelles song or something or something like that, that was really redone by Smith and he knew the Smith version...

Sebastian: He knows it all

Sydney: All of it, and the jukebox in the movie, I'm sure you already know, Ami, is his personal jukebox that they trucked in for the movie and its full of all these really kick-ass, like, original 45 or LPs or whatever, and yeah, so all the songs in the movie I didn't know, especially that one at the end, which I think is so cool, in the crash scene, the Dave, Dee, Dozy, Beaky, Mick and Titch one. I learned a lot from him about movies, but he's got great taste.

Sebastian: Lee (laughs) kept her cheer-leading outfit, did you keep anything? 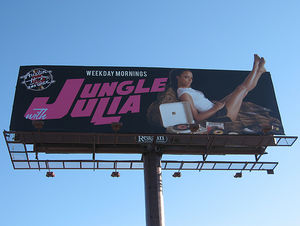 Sydney: No (laughs)!! I didn't! I wish I could've kept a billboard, did I keep anything? Well the bag she carries was actually my bag that I had on the set one day and they wanted me to use it, so obviously I have that. The bracelet I wore, is also mine, it was something I wanted my character to wear. But the only thing I kept that wasn't mine that was hers was something from her apartment, there were these space-agey kinda cool metal lamps that have these big bubbles on them...

Sydney: It's sort of like, there are metal rods, and it's very 60s and space age, and there's big bulbs, like a bunch of them, I kept those. I took 'em with.

Sebastian: Who's that girl on the big wall in your character's apartment? For our younger readers...

Sebastian: That was a nice reference

Sydney: Yeah yeah, and it's, you know, that set was amazing, her apartment was so cool, and so really Quentin. You know, you see that picture of me on the couch and the Brigitte Bardot picture and just the way it's all done was so Quentin, and he was involved in every detail of her apartment. Of the records that went in there, he wanted a thing of, a schedule from the Alamo Drafthouse like up on her fridge, and the colors we both flipped through, and he's like "pick anything that we wouldn't think would be in her apartment", so we went through and I took out something I didn't think would be in there, and he took out some stuff that he didn't feel was right, and stuff that he had found he put in there, some of it was his personal stuff, so it was really, it was an awesome set.

Sydney: Well you know as far as like everything that was written, she was so well defined, so everything that came out of my mouth was written word for word by Quentin. But you know, the flavor of Julia, and who she was and how she spoke and all of the mannerisms were things that I brought to the table and things that I'd done in my audition and things that he'd have really really liked and he had me do a fake radio show before I started, just to see what it would be like, so I sat down and recorded myself, I compiled a bunch of music, like some stuff from local bands from Austin, a lot of classic rock, lots of 70s rock, a lot of like bootleg things and hard to find things, and things that I thought Jungle Julia would have and put on the radio show, and I interviewed my band as like a fake band interview and that helped me really find her... once I found her DJ voice, I had her voice, and I really started to get into character. So I would say, a lot of the embodiment of her was just my own creation.

Sebastian: Is that gonna be on the DVD?

Sebastian: That would be exciting...

Sydney: He has it, he might put it on there. That would be cool.

Sebastian: When you first read the script, did you think "whoa, what's that"? This entire grindhouse thing....

Sydney: Uhm, not really, I just, I read it and I fell in love with whatever it was he was doing. I thought it was a kinda crazy and kinda cool idea of a guy who goes around killing girls with his car, that was like, who does that. It's just bizarre. So I was mostly just amazed by his dialogue, and he wrote the women so well, and it was so, it was funny, it was comedy, but it was also kinda creepy and strange and. So I was just really excited. I mean it's Quentin Tarantino, I mean I would chop off my left foot to do a movie with him (laughs)

Sydney: (laughs) Haha yeah literally. My right entire leg! ... to do a movie with Quentin Tarantino.

Sebastian: That's quite a sacrifice.

Sydney: Yeah it is a sacrifice

Sebastian: But you got it back

Sydney: Yeah I still have 'er (slaps her leg).

Sebastian: When I watched the movie and you stuck your leg out, I though oh oh, that's not good, and then he switched the light on....

Sydney: I haven't seen it, but can only imagine that it's creepy as all hell

Sydney: Really? Ooooh uuuuuh(excited) I wanna see it tomorrow, I'm excited. I mean it's so sad, because you really get into the girls, you know what I mean, you're really like.... you start to really like 'em and they're rocking out in the car and having such a good time and you just... they don't know, they don't know anything's wrong, they don't know what's coming and then creepy crazy Stuntman Mike waiting for them...

Sebastian: Yes when I read the script, I thought during the first half of Death Proof, all these characters, you went out with them to the bars, they had a lot of fun, and then they'd go to the lake house and stuff, but then WHAM. And then you have a new bunch of characters....

Sydney: I know, you're like "what the hell".. yeah. You know i think he wanted to... I heard him say this, he wanted to really spend the first part of the movie like just get settling people in. Getting people attached to these characters, getting people to, you know trying to get the audience to figure out what is this man's deal. You don't really know. and... boom. Then you okay the second half of the movie is, you know his emo, and now it's like you're kinda on the edge of the seat waiting for this to happen, and it flips around and he gets hit.

Sebastian: After Grind House, what's next for you?

Sydney: I don't know. because I'm a little spoiled now, it's a little hard to find that next thing.

Sebastian: I've heard that a bunch of times today....

Sydney: It's true, like what do you do after that. It's very hard to not wanna do something that's equal to this amazing experience, you know that's such a great character, and a wonderful director, and such a great thing to do, and I mean eventually I'm gonna have to settle for something (laughs) but, I mean this is just an awesome experience.

Sebastian: Do you have a preference in terms of genre now?

Sydney: Not necessarily really in terms of genre so much, but as to just another kick as movie, I'm kinda into this like ass-kicking, cool woman, you know, female empowerment stuff, so I wouldn't mind doing more of that

Sebastian: Next time you wanna kill the killer

Sydney: I really do