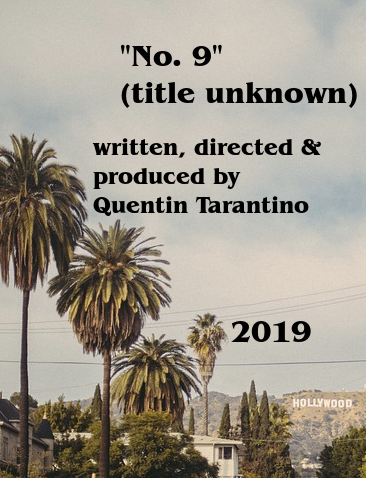 #9 aka Untitled #9 aka No. 9 is the alias by which Quentin Tarantino's upcoming and ninth motion picture is currently being referred to in Hollywood. Title and story are currently unknown, what is known is that the film is set in Los Angeles in the late ’60s and early ’70s. In March it was revealed that the film will be called Once Upon a Time in Hollywood.

Tarantino has repeatedly stated that the movie is not about Charles Manson, but one of his victims, Sharon Tate, seems to be a main character in the story. "Those who’ve read it said the script has heart and a strong commercial appeal, and if there is a film of Tarantino’s it can be best compared to, it would be Pulp Fiction, which also was set in Los Angeles. The film will carry a budget in the range of Django Unchained." (Deadline). According to Variety, the plot involves a male TV actor and his stunt double sidekick looking for a way into the movie biz after one hit series. The murder of Sharon Tate and her friends by the hands of Charles Manson's murderous family is the backdrop to the main story. According to Tarantino via Sony, Once Upon a Time in Hollywood is "a story that takes place in Los Angeles in 1969, at the height of hippy Hollywood. The two lead characters are Rick Dalton (Leonardo DiCaprio), former star of a western TV series, and his longtime stunt double Cliff Booth (Brad Pitt). Both are struggling to make it in a Hollywood they don’t recognize anymore. But Rick has a very famous next-door neighbor…Sharon Tate.”

Production will begin mid-2018 for a worldwide August 9, 2019 release, aiming for an R-rating. The budget is said to be approx $100 million. The deal with Sony Pictures is said to include first-dollar gross and final cut on the film for Quentin.

Brad Pitt (as Rick) and Leonardo DiCaprio (as Cliff) are confirmed as the two male leads. Actors and actresses rumored to be in talks for roles are Margot Robbie (as Sharon Tate) and Tom Cruise. Said Tarantino: “I’ve been working on this script for five years, as well as living in Los Angeles County most of my life, including in 1969, when I was seven years old. I’m very excited to tell this story of an LA and a Hollywood that don’t exist anymore. And I couldn’t be happier about the dynamic teaming of DiCaprio & Pitt as Rick & Cliff.” (Deadline, March 1)

Discuss in the forums