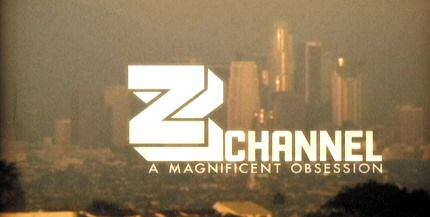 Throughout the 1970s and 80s, The Z Channel was a dream come true for lovers of cinema. On Z, you could see every kind of film, from European Arthouse cinema to Hollywood blockbusters. Z was essentially the first pay cable channel to run movies 24 hours a day. This was before the advent of VHS Players as well as HBO and Showtime in the early 80s. This new documentary by Xan Cassavetes (the daughter of the legendary Actor-Director John Cassavetes) explores the life of the Z Channel and its head programmer, Jerry Harvey. We learn about Harvey's life through interviews with his friends and co-workers from the Z Channel and also from the directors and actors Jerry's work touched. Film was his life and he was truly obsessed with the artform of cinema. He was also plagued with mental problems most likely stemming from his abusive childhood. His father, a court judge, was an alcoholic and a very cruel man. Jerry also had two sisters and we find out that both of them ended up committing suicide. We get to hear outtakes from a radio interview with Jerry from 1985. He comes across as a very mellow yet serious man. One thing we learn is that film became an escape for him from his life in Bakersfield, California which he described as bleak. After attending college at USC in the late 60s, Jerry got a job as a film programmer at the Beverly Canon Theater in LA. While there, Jerry began showing many of his favorite films and one film he got to show uncut was Sam Peckinpah's The Wild Bunch (1969). The uncut print was delivered by none other than Sam himself and pretty soon Jerry became fast friends with Sam. After working as a programmer for a few years, Jerry began writing screenplays, one of the scripts he wrote was a Western called China 9, Liberty 37 (1978) this got produced and was directed by Monte Hellman (Two Lane Blacktop, 1971). Jerry got to be part of the production of the film and he got Sam Peckinpah a cameo as an old gunfighter. This was a great time in Jerry's life as his close friends recall.

The extensive film knowledge and love Jerry had showed up in Z's lineups. You could see a neo-realist Antonioni double feature one night and a John Ford Western the next. Jerry would find obscure films that had dissapeared from theaters or ones that noone else knew about and bring them to the forefront of pop culture in LA. It was an exhillerating and adventurous style of programming noone had seen before. For years, residents in LA got to watch cinema they never knew existed. It was a film school in itself, a celebration of everything film straight from the mind of Jerry Harvey. Even though Jerry didn't make the films, he treated them as if they were his own, sharing the celluloid treasures he loved with others.

One film in particular that caused a huge sensation on Z was Michael Cimino's full version of his massive studio breaking flop Heavens Gate (1981). The film was an epic about the Johnson County Wars which took place in the 1890s. Jerry Harvey and many others considered the complete version of Heavens Gate to be a masterpiece. Cimino was another close friend of Harvey's but refused to be part of this documentary for personal reasons. Jerry not only worked on championing Heavens Gate, but Bernardo Bertolucci's uncut print of 1900 (1976) (which ran for 6 hours), as well as Sergio Leone's epic gangster film Once Upon a Time in America (1984) which upon its theatrical release was butchered by editors and became a critical failure. Star James Woods recalled that one critic who had labeled the film a flop in its initial run saw the the complete version years later and called it a masterpiece. In 1986, Oliver Stone's political thriller Salvador was met with no support from critics and dissapeared from theaters in a matter of weeks. Due to Jerry Harvey's promotion of the film (a huge spread in the Z Channel program guide) Salvador became a sleeper hit and James Woods and Director/Co-Writer Oliver Stone were both nominated for an Oscar that year.

Directors Quentin Tarantino and Alexander Payne remember Z Channel as teenagers in the early 80s. Quentin was unable to receive Z Channel in his area of LA so he ended up watching tapes of the channel's line up recorded by his video store boss Lance Lawson. QT comically declares how tortured he was when he saw the many great films Lance didnt record but were advertised on the Z Channel. In this documentary, Payne wears the Z Channel t shirt he was sent after writing an emotional fan letter to the station.

By the late 80s, Jerry Harvey's beloved Z Channel was slowly beginning to be broken apart by other cable TV channels taking over LA. Z had to change its pure film lineup and add sports to survive. While Jerry's co-workers became distressed, Jerry told them all it would be ok. One night, after a pleasant gathering at a restaraunt with friends FX Feeney and Michael Cimino, Jerry Harvey and his new wife Deri went home. That was the last time Jerry or Deri would be seen again. Jerry shot Deri, then turned the gun on himself. It was a shocking tragedy right out of one of the films Jerry would rave about. As his friends state in the film, when Jerry died, The Z Channel died. The result of Jerry's death was the end of a dream that he shared with his co-workers, friends and Z viewers. It was truly the end of a golden age.

EXTRAS: Z Magazine 23 page Mini Booklet featuring reviews of many of Z Channel's lineups by F.X Feeney and others.

DISC ONE: Audio Commentary by Director Xan Cassavetes, Marshall Persinger (Producer) Rick Ross (Producer), Iain Kennedy (Editor), Gabriel Reed (Asst Editor), Johnathan Montepare (Associate Producer), John Pirozzi (Director of Photography). DISC TWO: A nice collection of Z Channel related stories and interviews, including: The story of the legendary uncut print of Sam Peckinpah's Pat Garrett and Billy The Kid which was recovered with a secret code word and screened at USC. Director Paul Verhoeven talks fondly about his controversial Dutch films Spetters and Turkish Delight. Robert Altman explains the origins of his film Three Women. An incredible story about the day Sam Peckinpah hung out with Federico Fellini. An exerpt of the AFI Tribute to Z Channel (1986), in which Actor James Woods makes it known how much Z Channel means to him and to the community. A short look at a Z Channel interview program called "On The Film Scene" hosted by film critic Charles Champlin. A story about Orson Welles seeing Touch of Evil on Z Channel in its original intended form the day before he passed away. The complete Jerry Harvey Radio Interview from KCRW. Z Channel Magazine Slideshow.

Buy now: From Amazon.com | or: out of print Special Edition

Z Channel: A Magnificent Obsession mixes the love of film with a truly sad and shocking tragedy in a touching way. Xan Cassavetes not only shows her love of Z Channel with this documentary, but her need to share with us the life of Jerry Harvey, the tortured soul and film obsessed wizard behind it all. Z Channel was yet another golden age that has sadly faded into pop culture history...that is, until now. As a longtime film lover myself, I really appreciated getting to see this documentary gem and learning about the days when film as an artform meant more to a community than simple commerce.