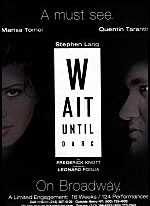 The most interesting line in the new production of Wait Until Dark comes right after the brick curtain rises. Having just broken into a photographer's house and rummaging around a bit, two criminals discuss street values of different things.

"How `bout this camera?" one asks.

"Camera? You can't give those things away anymore."

It's a significant line, considering the play is the vehicle for Oscar-winning screenwriter Quentin Tarantino's Broadway debut, appearing opposite Oscar-winning actress Marisa Tomei, herself making her debut (after Jennifer Jason Leigh bailed out). It's fascinating to see what these two (Tarantino in particular) translate from the screen back to the stage - something that has generally been overlooked - and to consider future projects as well. What we really want is a story with the scope of a movie and the intimacy of a play. And what better way for these Hollywood-types to get to know this medium than immersion?

Tarantino and Tomei do a great job of immersion, both of themselves and the audience, into this beautifully crafted thriller by Frederick Knott. Quentin plays Harry Roat, a criminal mastermind who has coordinated a big drug smuggling operation. The only problem is the drugs are hidden in a doll, which has gone missing. Roat thinks the doll is in the apartment of a woman, Tomei, whose husband just left on a business trip, and who has been blind for six months from an accident. The story is further complicated when Roat enlists the help of two thugs, who together decide to con the woman out of the doll instead of just muscling it away from her. Suspension of disbelief allows the trio of criminals to become an improv troupe, and the story evolves from there.

Director Leonard Foglia does an interesting job translating this `60s play-turned-movie back into a play. Aided by a beautiful set from Michael McGarty, there are some really nice effects that set the mood, such as the illusion of a camera zoom to start the show, created by slowly moving the set up stage, and the imaginative stage edits, where a strobe flash and a click effect the darkening of the stage, only to have the same flash and sound bring the lights up again on a newly positioned cast. Perhaps most compelling element is Darron West's sound design, which quite effectively borrows music from movie thrillers to build tension at just the right moments.

Tarantino must have had some directing influence, most noticeably seen in an overly gruesome yet trademark murder scene. But beyond that, his character was quite believable: well suited to Quentin's pre-existing image, yet different enough so that you knew it wasn't just him being himself. His best moments were during the blackout scene towards the end, where he and Tomei exchange dialogue in the dark. Their interplay was quite natural, and helped bring the show over the top.

Tomei was truly the star, though, overcoming whatever Brooklyn accent people might have been expecting to perform blind to a live audience, never breaking character. The little things were what made it ring true: her difficulty in hanging up a phone and her frustration as Gloria, the obnoxious but eventually important kid who lives upstairs, nicely played by Imani Parks, drops things all over the apartment which Tomei knows she's going to have a hard time picking up. Tomei also brings a richness to the part that makes you really care about her and her welfare, perhaps aided by the despicable criminals who are blatantly taking advantage of her, and her will to fight back in the second act.

I think this play has been treated extremely unfairly by the media. The fact that the two stars have previously successful credits sets them up for a fall, and I think that the Boston press has taken too much license with that point. Reviews have been pretty miserable, to be generous. The Boston Phoenix even ran a column last week listing "5 Quentin Tarantino Roles," which included a Laurie-killing Curly from Oklahoma!, the Phantom in a gimp suit trying to get Christine to submit, and an abusive Daddy Warbucks, a.k.a. Big Daddy B, roughing up Annie. Sure they're funny, but they ignore not only the play's value as among the best entertainment in town right now, but also the possibilities that might be opened up if Tarantino decides to try his is hand at stage writing and directing as the result of this successful endeavor.

Overall, Wait Until Dark is a fascinating plot played out by fascinating people, both in their own right and in their ability to bring the characters to life. It's only here for another week, so you better hurry if you want to try and catch it before it departs for New York. Who knows? It might end up further changing the value of a camera.

Oscar-winning filmmaker Quentin Tarantino appears to be in no danger of adding a Tony to his collection. Critics have ripped into the Pulp Fiction auteur's Broadway debut, using just about every word in the book--save for QT's beloved "F" one--to pan the production.

"Turn Out the Lights on Wait Until Dark," headlines today's New York Daily News--and that's about the best of the notices.

Wait Until Dark is Tarantino's stage vehicle--a revival of the 1966 play (later, a 1967 movie starring Audrey Hepburn) about a blind woman terrorized by druggie hoods in her Greenwich Village apartment. QT plays one of the hoods; fellow Oscar-winner Marisa Tomei plays the blind woman.

The play officially opened last night. It was officially panned this morning.

"In fairness to the comparatively inexperienced Tarantino, [the director] got every bit as bad a portrayal from [costar] Stephen Lang..." (New York Post) And one local radio critic echoed the whispers from Boston, where the production had a brief try-out run: The audience giggled when it supposed to gasp.

Boston critics gave the play lousy reviews, too, but Tarantino's star power packed 'em in anyway. The same appears to be happening in New York.

A producer for the production told Sunday's New York Post that Wait Until Dark is already nearly sold out for its limited, 16-week Broadway run.

Critics there have lit into the Oscar-winning filmmaker, who's making his major stage debut as an amoral psycho killer in a Broadway-bound revival of Wait Until Dark.

"Giggles rather than gasps in some key places," said the Boston Herald. The show, costarring fellow Academy Award alum Marisa Tomei, opened last Thursday in Boston. It's due to make the move to New York on March 27, when it begins previews. The play is set to play the Great White Way for a limited, 16-week run.

The Globe dings Tarantino for a "straightforward recitation in which his hands do more acting than any other part of his body." And the Herald makes a surprising critique: The man whose career is built on crafting glorious dialogue for Pulp Fiction lacks "ease in delivering the dialogue" of the play.

To be fair, the play's the thing in the theater--and, according to Variety--the play in question here stinks. "A laborious giggle rather than an entertaining scare," the trade paper rules, noting that the production was already creaky when it first bowed in 1966. (The play was made into a 1967 film, starring Audrey Hepburn as the sight-challenged heroine.)

Stewart Lane, one of the revival's producers, tells the New York Post that he's "disappointed...but not discouraged" by the Boston notices. Moods are no doubt being bouyed by strong ticket sales, with Tarantino's star power proving especially effective in drawing young people.

Wait Until Dark is said to be Tarantino's first stage work since age 19. He'll turn 35 the night of his Broadway debut.