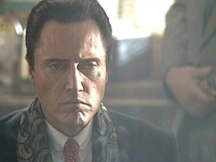 Vincenzo Coccotti is a Sicilian consigliere for local Detroit mobster "Blue" Lou Boyle. Sent with some hitmen to the abode of Mr. Clifford Worley, (the estranged father of Clarence Worley) whom they tracked down by Clarence's driver's license. Coccotti tries to get the current whereabouts of Clarence and more importantly Boyle's drugs. However, he quickly underestimates his hit, as Clifford turns out to be an incredibly difficult character. Clifford not only never reveals anything he knows of Clarence, he goes so far as to personally offend Coccotti by explaining a true historical fact about Sicilian heritage.

Coccotti gets so pissed off by this, he ultimately is forced to kill Cliff. The trip is not wasted as one of the henchmen find info on the son's whereabouts stuck to the refrigerator.