This part of the film centers around Vincent Vega and Mia Wallace (eventually). But we open with a close up of Butch Coolidge (Bruce Willis). He is sat in a club talking to a man who we are situated behind but cannot see. The man Butch is talking to is Marsellus Wallace (Ving Rahmes). In this scene we do not actually see Marsellus's face only see the back of his head. This is when we first encounter the famous 'Band-Aid'. (Some people have speculated that this band aid covers an incision the devil has made in Marsellus neck to steal his soul. The real reason is that the make-up artist put it there to cover a scar on the back of Ving Rhames neck because she thought it would distract the audience.) From this scene we learn that Marsellus is Butches employer and that he want him to throw an upcoming fight.

Following this scene Vincent and Jules enter the club wearing strange clothes and carrying the suitcase from earlier in the movie. They have come to deliver the suitcase to Marsellus. We also see some tension between Vincent and Butch when they exchange words at the bar. Vincent calls Butch "Palooka" which is a reference to a boxer who was supposed to lose a fight, but didn’t. We are also introduced to Quentins cigarettes that exist in his movie world, 'Red Apples'. 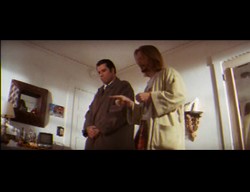 Next we are introduced to Jody (Rosanna Arquette) and Lance (Eric Stoltz).They are husband and wife and Lance is Vincent's drug dealer. Vincent buys drugs from Lance and 'shoots up' in his house. The following heroin scene determined the fate of the film, Jersey films had made a distribution deal with TriStar films, but they did not want to release a film that featured a heroin user. Miramax stepped in and began a long relationship with Quentin. During this sequence we watch Vincent travel to Marsellus house to collect Mia.

Vincent arrives at Marsellus' home somewhere in the Hollywood Hills. He is still high from the heroin he shot up earlier. Vincent finds a letter from Mia on the door which tells him to come in and fix himself a drink. Vincent saunters into the upscale home and we hear the song "Son of a Preacherman" by Dusty Springfield playing. Meanwhile, Mia is upstairs spying on Vincent through her security camera set up. Mia talks to Vincent through an intercom system. She is playing a little game of cat and mouse. After Mia is ready, she interviews Vincent using her camcorder to find out what kind of guy he is. She asks him several pop culture related questions and he answers them sharply. Mia decides Vincent is cool enough and the two continue on to their dining destination.

The two new friends arrive at Jack Rabbit Slim's a retro pop culture themed restaraunt and make their way inside. The interior of Jackrabbit Slims is an explosion of movie, TV and music iconography from the 1950s and 60s. Vincent looks around and sees waiters and waitresses dressed up as actors such as James Dean, Marilyn Monroe and Dean Martin & Jerry Lewis. On the main stage, a Ricky Nelson imitator sings "Waitin In School". Mia finds them a table and they sit down and order their drinks and food. Mia gets a 5 Dollar Shake (Martin & Lewis style) and a Durward Kirby Burger. Vincent gets a Vanilla Coke and a Douglas Sirk steak. The two get into a fun chat about the Tony Rocky Horror story Jules relayed to Vincent earlier in the day. Mia lets Vincent know that the story was 100% untrue. Vincent is a bit deflated, but they pick up some more energy when Mia decides to enter the Jackrabbit Slim's Dance Contest. Vincent tells her no, but Mia forces him to take part. The two hit the main floor and dance up a storm doing all types of cool moves, from 'The Swim' to 'The Twist' to 'The Batoosie' They twist on into the night and then head back to Mia's house to chill a bit before Vincent leaves. Vincent needs to goto the bathroom, so he does. Mia turns on some music and pours some more drinks and she dances to "Girl You'll Be A Woman Soon" an old Neil Diamond song covered by Urge Overkill. Mia accidentally finds the heroin Vincent is carrying. A big mistake is made when Mia takes the heroin for coke (due to it being inside a plastic baggie instead of the standard rubber balloon). Mia snorts a big line of heroin and OD's. After coming back from the bathroom, Vincent discovers her in the overdosed state. He quickly puts Mia in the car and rushes back to Lance's house to get some help. Vincent calls Lance on the phone and tells him whats going on, but Lance screams at Vincent to take Mia to a hospital. Vincent refuses and drives on to Lances and crashes right into the side of the house! Now Lance, Vincent and Jody must revive Mia before its too late. Their only chance is Lance's medical hypodermic needle kit!! The needle is filled with a serum that when injected into the victim's heart, will bring them back from their OD coma. This next sequence is one of the most iconic in the whole film as the group get ready to watch Vincent plunge the needle directly into Mia's heart. The suspense is super high. Finally Vincent does what he has to do and Mia is brought back from the brink of death. Shes safe....Vincent returns Mia home once again and the two say farewell. Their date was a night neither of them would never forget!