THIS PAGE IS CURRENTLY UNDER CONSTRUCTION. Help us expand this page by editing it ( see also: How to contribute). 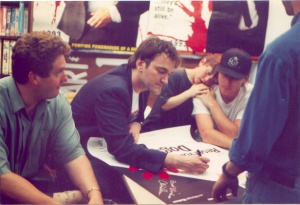 The Manhattan Beach Video Archives that was once located in Manhattan Beach, California is the video rental store that Quentin Tarantino began working in at age 22. While at Video Archives, Tarantino met his friend Roger Avary, who he co-wrote the script Open Road with. He also became friends with Craig Hamann, who he co-wrote and filmed My Best Friend's Birthday with. Also working there was Chuck Kelley, co-founder of the internet radio station LuxuriaMusic, and Daniel Snyder. The store was owned by Lance Lawson. After the store went belly up, Tarantino bought its entire inventory.