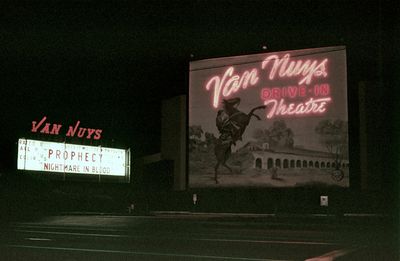 Van Nuys Drive-In was one of many Pacific drive-ins that had murals on their screen towers. It opened in 1948 and parked 891 cars. It lost its mural and original screen tower when it became a tri-plex drive-in. During its last year, it was the last drive-In located in the valley area of Los Angeles. As Pacific Theatres closed the theater, its marquee said “closed for the season”. That season never came. The Van Nuys Drive-In sat empty for a few years and was being used to store cars from a nearby dealership. It was demolished in the late-1990’s.