The Whole Bloody Affair is a term that has been used by the press and Tarantino for the integral version of Kill Bill. That version premiered at the Cannes Film Festival in 2006 and is yet awaiting wide release. It is comprised of both Volumes of Kill Bill, plus material that is yet missing from the US and international versions (but was included in the Japanese release). The chapters will remain in order, the cliffhangers and tags will be dropped. Tarantino had Production IG do an additional 7 minute anime sequence for the O-Ren chapter, which was not shown at Cannes.

It has also been called the "version integral", especially in the French press.

Empire Online was one of the few online magazines that provide a review of the uncut Kill Bill. The version, that was shown in Cannes, combines both Volumes as one film (but did not yet have the additional anime footage)

Some changes, according to EO

Quentin Tarantino in an interview with us on January 12: "We’ve actually added some things to it. We did a whole little chapter that I wrote and designed for the animated sequence, that we never did, because we figured, back when it was gonna be one big movie, it was going to be too long, so we didn’t do it. So when we were talking about re-releasing it, they asked is there anything you can put in, and I said no I put everything in there, but… there’s one sequence that we wouldn’t even have to shoot! So we got together with Production IG and did it, and it’s really cool. So it’s this little seven minute sequence, it’s really cool, it’s in the O-Ren chapter." (Click here to read our interview with Tarantino on the Whole Bloody Affair) 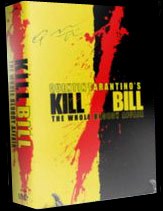