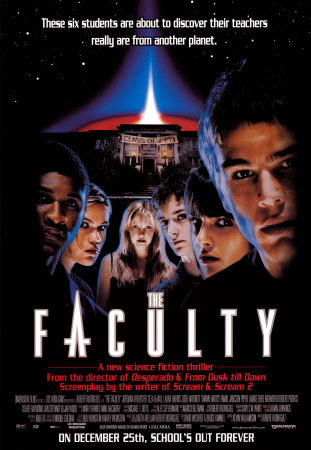 |More On This Film:

A group of students at Herrington High School learn that their teachers' bodies are being overtaken by aliens. Soon six students are the only ones left unaffected and must band together to save the school, and perhaps the world, from this alien invasion. Geeky Casey, princess Delilah, jock Stan, drug dealer Zeke, misfit Stokely and new girl Marybeth are an unlikely team, but together they discover what - and who - is behind the invasion?

I didn't expect much from "The Faculty," despite liking Robert Rodriguez's work. I was happily surprised to see, if not a perfect movie, quite a good one peeking out amongst the forest of such teen horror drek as "Dangerous Minds." The plot is fairly basic: The teachers at an Ohio high school have been replaced by aliens (or have they?) as the first part of a plan to take over first town and then the world. Not surprisingly, given Kevin Williamson's screenwriting duties, the script is highly self-conscious, and almost immediately, characters in this alien invasion film begin comparing events to "Invasion of the Body Snatchers" and Robert Heinlein's "The Puppet Masters." (They then make a few leaps in logic that, while perhaps necessary for the plot, seem a little silly and it's disappointing to see that their assumptions are pretty much spot on.)

Unfortunately, Williamson's normally good work with teen characters -- although they may be highly stylized, you can't say his "Dawson's Creek" teens aren't at least interesting -- gets a little too broad here. We have Zeke, the super-genius drug pusher who's stayed back a year in school, a number of rather cypher-like other teens (including the coolest girl in school ... the editor of the school paper? Huh?), although one at least is supposed to be a cypher.

While the teen stars of the film somewhat disappoint, given the degree to which they were underwritten, the titular faculty of the high school in the movie is a hoot, with a good number of marquee stars almost unrecognizable as high school teachers. Salma Hayek is anything but glamorous as the school nurse, as is Famke Janssen, who spends most of the film looking like anything but a bombshell. Jon Stewart is a convincingly scruffy high school science teacher and the obligatory "cool teacher" every school seems to have. And Bebe Neuwirth, perhaps typecast because of her role as Lilith on "Cheers," plays it cool as the school's principal. The actors are clearly having fun as the teachers-turned-alien invaders, and it's a pleasure to watch them wind the film to its inevitable conclusion.

That conclusion, incidentally, isn't quite so inevitable as it might seem, with a few well-done last minute twists and turns, although the big confrontation with the boss alien falls into the same trap as Stephen King did with "It" -- was it really necessary after a story full of effective small scares to go with a big boogeyman of a monster? Likewise, the denouement is a little hard to believe, and beneath both Williamson and Rodriguez.

But those are minor quibbles. Overall, "The Faculty" is a fun, and surprisingly well-made space invaders movie, and a treat to watch.