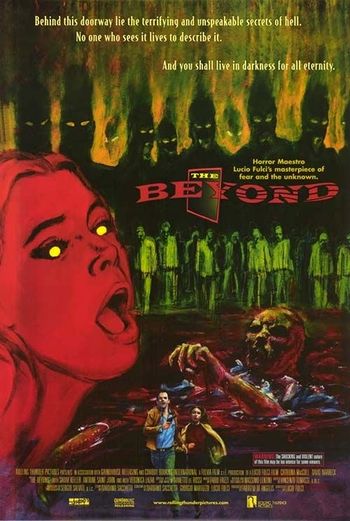 "The Beyond" is the fourth theatrical release from Quentin Tarantino's Rolling Thunder company, a division of Miramax which allows him to release virtually anything he likes, whether it's a recent Hong Kong film, or a 70's exploitation film. He's basically an excited film fan sharing his favorites with us. "You've gotta see this movie!" he seems to be saying. You can also see in "The Beyond" how Fulci influenced Tarantino's own films. - Combustible Celluloid

Lucio Fulci's original film print of The Beyond had been lost for over 25 years until Sage Stallone and Bob Murawski found a print and put the film together under their Grindhouse Releasing label. What they did was something horror lovers were waiting a long time for. This print of The Beyond is beautifully restored and remastered. You can now watch it in all its Italian gory glory. We also have to thank another gorehound named Quentin Tarantino for his great DVD label Rolling Thunder Pictures, which The Beyond is co-released under.

The film opens in Louisiana, 1927, We see a painter named Shweik (Antoine St John) alone in his room at a hotel working on his art. Meanwhile some townspeople are floating down a river nearby towards the hotel, we can only suspect that they are going to cause trouble with the constant cross cutting. The look of this opening sequence was shot in color, but Cinematographer Sergio Salvati uses a brown sepia tone to give it that spaghetti western flashback effect. After the locals find Shweik in his room they proceed to lash him with iron chains and this is where Lucio Fulci's trademark gore FX comes into play. With each crash of the chain, Shweiks skin is torn open and blood begins to seep out. Fulci takes great care to let each shot play out so we are replused but thrilled at the same time.

After dragging Shweik to the dark grungy basement, and lashing him even more, the locals nail him to the wall with metal spikes. This isnt the worst part, after successfully pinning him to the wall, they take buckets and shovels full of quicklime and throw it on Shweiks body and face. Then as Fabio Frizzi's funky score kicks in we watch as the acid slowly corrodes Shweik. What an opening!!!

Flash forward to 1981, A young beauty named Liza Merrill (Catriona MacColl) has come into owning the hotel and shes trying to restore it. A local painter is on a scaffold and suddenly he sees a white eyed woman, he then falls to the ground and the blood dribbles out of his mouth. Liza and company take care of the injured man and they try to find out what made him fall. He screams "The eyes!". The room the painter saw the mysterious woman in is Room 36, the same room Shweik inhabited. Liza hires a plumber named Joe to fix the leak in the basement, Joe is of course unaware that the wall hes working on is one of the 7 Gates to Hell. A hand flies out at Joe and proceeds to gouge his eyeball right out!

Throughout the rest of the film, Liza meets several people including Emily (Sarah Keller) a blind girl who warns Liza about the evil in the hotel and a local doctor played by David Warbeck who helps Liza get through all the events going on. You might notice that the film doesnt really have a solid storyline, instead its a sequence of images and sounds that are meant to give you the feeling that you are IN The Beyond where noone is safe from evil forces. NOTE: Watch out for some funny little moments including a shot of a "DO NOT ENTRY" sign in the hospital and Liza delivering the line: "You have carte blanche but NOT a blank check".

Lucio Fulci's cinema team, headed by Make Up/FX artist Gianetto De Rossi did an incredible job of creating the visual effects. The Italian film crews really were masters of on-the-spot invention and they were brilliant at creating something great from nothing. The Beyond contains things you just wont see in other horror films, including acid destroying skin, heads exploding, a killer tarantula attack on a man's face and lots of eye gouging and popping. You'll also see a dog ripping out a womans throat! Note: You can see the influence of Fulci's gore FX in Quentin Tarantino's film Kill Bill (2003-04).

Fulci's style of directing was very exploitive, but he also had an artistic style as well. I think thats one reason many film lovers consider Fulci a master. He was capable of really grossing you out, but also adding an intelligence and surrealistic quality to a story that by another director just wouldnt have the same feeling. 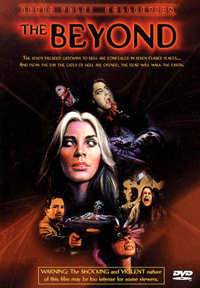