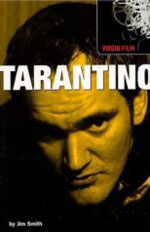 Jim Smith had previously published books about Tim Burton and George Lucas. The fact that he is an experienced author in this genre shows. I started reading this book right after I read Quintessential Tarantino (review here ) and Holm's Pocked Essential Tarantino (review here ). I think I now have a good picture of the latest Tarantino books and I hope that I can, in the following few paragraphs, give you an impression on how these books relate, and why Smith's book is easily one of the best Tarantino books ever.

To begin with, this book isn't without its flaws. There are a few aspects that seem missing a bit, most of all the biographic aspect. While Smith certainly touches upon it, to me it seems necessary to have at least one chapter about just the life of the man. After all, the book is titled 'Tarantino' and not 'Tarantino's films'. Aside from that, Smith also fails to mention a number of aspects, mostly regarding upcoming projects, rumors and speculations, that I thought marred the overall picture. One of those would be Tarantino saying he actually has three screenplays for Inglorious BAstards, which is not mentioned in the book at all. But that's just small things. Another thing that bothered me was, that the book lacked something like a real closing chapter. While Smith does reflect on Tarantino and his work, it is merely a matter of a few phrases. At the end of such a great book, I expected a more insightful conclusion.

Now to the praise: Jim Smith has written one of the - in my opinion - best books about Tarantino's work ever. Edwin Page's book just pales in comparison to the professionality of Smith's writing and the revelatory analysis in this book. And he excels Holm in the way he structured his book. Let me say this: Holm's book is excellent, but it is - and doesn't claim to be else - a pocket essential book. Smith on the other hand, follow's Holm's agenda of covering Tarantino's work in following a pattern of analysis that tries to focus on certain aspect. Smith does this by looking at the screenplay, key shots, intertextuality, music or recuring elements. And he even has a "how to use this book" at the beginning where he clearly explains how he goes about. Occasionally he has other aspects in chapters, depending on whether the film at hand demand additional flanks to be approached or considered. He analyses Tarantino's movies with a well-fit portion of objektivity while clearly showing that he is a fan of his work, even an admirer, but unlike Page, he has clear preferences and does have the one or the other thing he is critical of. Smith is also determined enough to focus on some movies more than on others, going as far as dealing with certain entries in Tarantino's filmography only in the form of little text boxes, spread around the book. These text boxes, mind you, sometimes also include great little sidenotes, such as on the Shaw Brothers, or the Sundance Festival.

The greatest strenght of Smith's book is its language. Page writes on a university student's level - that is nothing negative - but Smith clearly has the better writing style. Reading this book you know he is a professional, he can explain things you never noticed about Tarantino's films, he manages to point out facts that nobody ever cared to point out, such as the mistakes in Bill's Superman speech, and he manages to connect aspects from different Tarantino films not by endlessly repeating himself (like Page does) but in a way that makes sense. By analysing the films from their development over the screenplay to the way they were filmed, taking into consideration Tarantino's casting choices and recurring patterns of style, he manages to convince the reader, inform the reader, and entertain the reader. While he doesn't keep footnotes or even real endnotes, his book is full of good information, quotes and insights. And he has an eye for - like Tarantino - when detailed analysis is needed and when it isn't. He doesn't go on and on about everything, he gives a concise analysis and when necessary, he might spend more than a page on just one thing.

It is hard to explain why, but this book is an excellent 'melange' of all the books that came out before this one. Not only does it server as an excellent look-up volume to embark on analyis or term papers, it also gives a marvellous overview over Tarantino's work while analyzing his movies from a point of view noone else before him has done, and taking a look at the man's work in a numer of contexts that matter to his fans. In short, Jim Smith's TARANTINO is Well-written, full of insight and not too short. It might very well make it to the top of must-read Tarantino books. It's only flaw is the lack of chapters dealing not with movies, but there's Jami Bernard to fill in the gap, or the first chapters of Holm.

Written by Sebastian Haselbeck (No unauthorized reprinting, copying or distribution!)