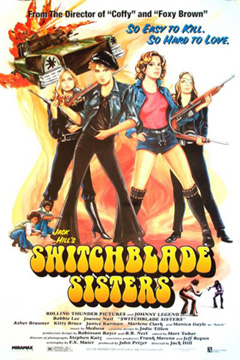 What's all the fuss about? Bottom line, Switchblade Sisters is simply an early example of post-modern genre comedy, a self-referential farce in which we amuse ourselves by listing all the links we can find to all the other 1960s genre movies that played to The Boomer Generation. - Culturecourt.com

Jack Hill's drive-in cult classic Switchblade Sisters is really one of a kind in the world of Exploitation cinema. It was originally released under the title "The Jezebels" back in the 1970s, but after Writer-Director Quentin Tarantino bought the rights to the film and released it under his great Rolling Thunder Pictures label on DVD in the mid 90s, he changed it back to its original slashingly cool name. The film takes place in a sort of parallel universe. Hill actually envisioned the film to have a sort of a post Nixon era apocalyptic atmosphere. The film's opening credits sequence is really great, its a black and white picture montage of tough chicks set against the theme "Black Hearted Woman". The song is very campy and very fun to listen to. (Sweet ear candy for a Grindhouse geek like myself).

Lace (Robbie Lee) is the leader of an all female gang called "The Dagger Debs". They are the female counterpart of the "Silver Daggers", the all male gang. The Silver Daggers are run by Dominic (Asher Brauner) a big, crazy oaf of a guy whos also Lace's main squeeze. We meet The Dagger Debs as they proceed to shred a chunky repo man "Hammer" (Michael Miller) to bits after they corner him in an elevator. Lace is the James Cagney-esque leader who the other girls follow without question. Lace's number two in charge is the evil, one eyed Patch (Monica Gayle). She is ready to start trouble at the drop of Lace's hat.

They meet an unsuspecting girl at the local burger joint where they all hang out. Her name is Maggie (Joanne Nail). She looks like a cross between Farrah Fawcett and Elizabeth Shue. A perfect hottie to add to the mix of sexy chicks in the movie. Lace and Patch catch Maggie sitting at their favorite table at the burger joint and after a few rude exchanges, Maggie grabs her deadly metal belt and whacks Patch right in the eye. After Patch falls to the floor, she yells and screams and then growls "I'll get that bitch!". This is just the beginning of the fun.

The cops are called to the burger joint, and The Dagger Debs are all arrested and sent to a female detention center. The film enters the "Women in Prison" genre at this point as we're introduced to the fat, manly female detention headmistress "Moms Smackley" played hilariously well by Kate Murtaugh (Dr. Detroit). Moms, proceeds to drool and harass the young beauties in her husky voice and its hysterical. She sets her eyes on the new gal Maggie and thats that. Once she lays her paws on Maggie, Maggie replies with a "Get your hands off me you fat pig dyke!", sorta like Charlton Heston's Planet of The Apes line but different. Well Moms isn't happy with that and so its off to the crapper with her! Moms brings her henchwomen with her and once Maggie relents, they shove her head right in the toilet! Lace and the Debs hear Maggie's screams and they decide to give her a hand. Look out, its The Dagger Debs Vs Moms Smackley and the Dyke Guards! This is one of the funniest bathroom catfights in Grindhouse movie history and its played out to be so over the top, complete with cursing, boobies jiggling and toilet plungers to the face. After the Dagger Debs get Moms Smackley down on the floor they threaten to knock off her lesbian partner on the outside if she doesn't lay off them. Mom isnt dumb, so she gives up and all is well in Dagger Debs Land for now. Since Maggie is a newbie in all this, shes released early and Lace and the gang must stay. Lace takes a liking to Maggie and she asks her to deliver a private message to Dominic. Maggie accepts this and they begin a friendship.

Maggie delivers the letter to Dom but soon after Dom reads the personal message aloud in front of the entire gang and they laugh and giggle at Lace's heartfelt words. Maggie isnt pleased. She gives Dom a slap and tells him to go to hell for being such a bastard. Something happens between Dom and Maggie, an unsaid meeting of the minds. After Maggie returns to her house, Dom shows up and its WHAM BAM THANK YOU MAAM. Dom doesn't ask for permission from Maggie, he is on her like a wet shirt. 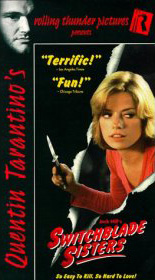 Lace doesn't know about this, and after the sordid details about Dom and Maggie are accidentally leaked by Dom's second in command Hook (Don Stark), Patch becomes the Iago in this Hamlet-esque story. Things quickly get out of control between Maggie, Patch and Lace. Patch continues to pit Lace against Maggie throughout the film. Maggie then becomes to new leader of the Dagger Debs, she even changes the name of the gang to "The Jezebels". The craziness rolls on with many key sequences, including a roller rink shootout, a blow job gone bad, a great knife fight between Maggie and Lace and much more.

The acting in the film is really well done for a low budget drive in film and Jack Hill really does have a unique style as an Exploitation autuer. He also manages to combine elements from several Grindhouse subgenres into the film including: women in prison and blaxploitation films. If you go through his filmography you will pick up that Hill always injects his work with a certain level of intelligence and depth. They are definitely Grindhouse fare, but at the same time, much more. This is just one reason why I'm such a fan of his films.

Note: The cinematography was done by a young Tak Fujimoto, who later went on to do many great movies including Silence of The Lambs (1991). 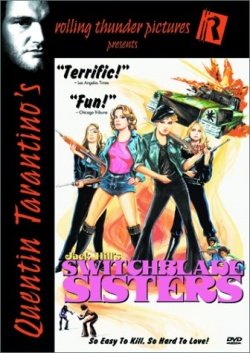