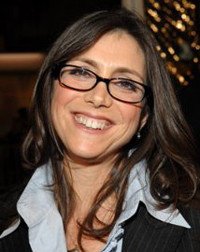 Stacey Sher is an American film producer. She was director of development at Hill/Obst Prods., where she became VP of production in 1987. Lynda Obst Productions hired her as Senior VP in 91.

She produced, among others, Pulp Fiction and is one of the producers on Django Unchained

According to Sharon Waxman, she dated Quentin Tarantino until the development of Pulp Fiction.