In 1994 Quentin Tarantino had an idea to create a company that would embody his own personal philosophy on film. Miramax heads, Bob and Harvey Weinstein, were equally enthused by Quentin's ideas of bringing new movie going experiences to the American screen. Rolling Thunder Pictures was launched in July of 1995 by Miramax as a specialty label to be headed by the Academy Award winning writer/director. (The company is named after the film Rolling Thunder by John Flynn)

"RTP is constantly in search of the missing pieces that help create the tapestry of film history, past and present. We are dedicated to filling in the blank spaces of this tapestry and finding a forum for these films, which can only further the love and appreciation of the art form."

Rolling Thunder, was created, according to Quentin Tarantino's prepared statement, because "it's a film buff's dream to give the theatrical experience to films that might never be seen in this country." Films released by the company include Chungking Express, Switchblade Sisters and Takeshi Kitano's Sonatine." -indiewire.com

“The idea of Rolling Thunder was always to bring attention to a lot of films and directors and performers who we felt had been overlooked in the past. Not just in the mainstream but in general,” Rolling Thunder’s Jerry Martinez - dvdreview.com. 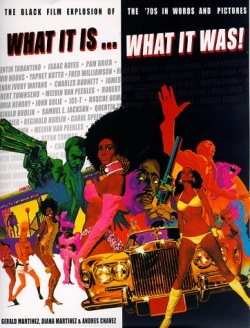 THE BOOK: What It Is... What It Was! - The Black Film Explosion of the '70s in Words and Pictures (by Gerald Martinez, Diana Martinez, Andres Chavez)

"I don't want to release new films so much as older exploitation movies and give them a new life," Tarantino wrote in an LA Weekly article last summer. "This is the personality I want the company to have. We're here to bring back the glory of '70s chopsocky movies, Italian crime films, blaxploitation -- we'll get a spaghetti Western in there eventually." -indiewire.com

From Hong Kong new wave to 70's exploitation films, RTP provides an exciting and insightful alternative to the fare inhabiting the local multiplex.

1998 has developed into RTP's most exciting year to date. They announce their RTP web site (www.rollingthunderpictures.com), the creation of a premium midnight movie revue, and theirlaunching of RTP's very own cinema book line. Their debut book, "What It Is...What It Was!" is an overview of the black film explosion of the 70's (publishing date: August 1998).

At this point the company doesn't exist anymore although some movies are still published under the name RTP.

According to Martinez and dvdreview.com, The Beyond wasn't the only horror film by Fulci, RTP was interested in: “Zombi 2 and The Psychic were other films by Fulci that we wanted to buy, but we had trouble acquiring them. It was really difficult to get the rights to those films, and since we had also intended to get The Beyond, we decided to shift our energy to The Beyond instead.”

'Rolling Thunder Pictures' a section of Miramax was to release up to four films a year, drawing on the world of Independent features, International Productions and film exports. But unfortunately by the summer of 97, two years after 'Rolling Thunder' was launched, they had stopped re-releasing movies, when Miramax refused to extend their contract. Miramax Stated that 'Rolling Thunder' was no more, due to a lack of interest shown in the movies that where re-released.