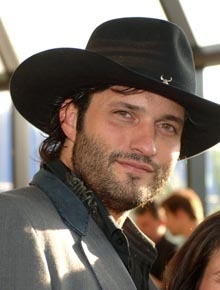 This page is currently under construction. While we are working on it, enjoy a little career summary from the Wikipedia:

Robert Rodriguez was born in 1968 in San Antonio, Texas.

He began his interest in film at an early age when his father bought one of the first VCRs, which came with a camera. He took the camera and started to make short films with his brothers and sisters participating as the cast and crew. It did not hurt that there were ten of them (including Robert) and that these early stages provided the crucial groundwork that would lead to Rodriguez’s development as a filmmaker.

After graduating from high school, Rodriguez went to the University of Texas where he also developed a love of cartooning. His grades were not good enough to get into the school’s film program, so he invented a daily comic strip entitled “Los Hooligans” with many of the characters based on his siblings – in particular, one of his sisters, Maricarmen. The comic proved to be quite successful, running for three years in a local paper while Rodríguez continued to make short films.

Rodríguez grew up shooting action and horror short films on video, and editing on two VCRs. Finally, in the fall of 1990, his entry in a local film contest earned him a spot in the university’s film program where he made the award-winning 16mm short, “Bedhead.” The film chronicles the amusing misadventures of a young girl whose older brother sports an incredibly tangled mess of hair that she cannot tolerate. The rest of the short film is a humorous account of how the young girl tries to fix her brother’s follicle monstrosity. Even at this early stage, Rodríguez’s trademark style began to immerge: quick cuts, intense zooms, and fast camera movements along with a great sense of humor that offsets the action

This short film attracted enough attention to encourage him to seriously attempt a career as a filmmaker. He went on to shoot the action flick El Mariachi in Spanish, inspired by John Woo films. El Mariachi, which was shot for around $7,000 with money partially raised by volunteering in medical research studies, won the Audience Award at the Sundance Film Festival in 1992. The film, originally intended for the Spanish-language low-budget home-video market, was distributed by Columbia Pictures in the United States. Rodríguez described his experiences making the film in his book Rebel Without a Crew. The book and film inspired legions of hopeful filmmakers to pick up cameras and make no-budget movies. While very few of those hopefuls went on to successful careers, the film and the book are widely considered important touchstones of the independent film movement of the 1990s. Many people realized for the first time that with only a little money and a lot of hard work and talent, it was possible to make a successful and popular film.

His next feature film was Desperado, a sequel to El Mariachi starring Antonio Banderas. The film introduced Salma Hayek to American audiences. He then collaborated with Quentin Tarantino on the vampire thriller From Dusk Till Dawn (which would see two sequels, which he co-produced) and with Kevin Williamson on the teen horror sci-fi flick The Faculty.

In 2001, Rodríguez enjoyed his first $100,000,000 (USD) Hollywood hit with Spy Kids, which went on to become a trilogy, with the last film released in a crude form of 3D. A third “mariachi” film also appeared in late 2003, Once Upon a Time in Mexico. He operates a production company called Troublemaker Studios, formerly Los Hooligans Productions, after Los Hooligans, a comic strip he wrote and drew at UT.

Rodríguez directed Sin City (2005), an adaptation of the Frank Miller Sin City comic books; Quentin Tarantino also directed a scene. During production in 2004, Rodríguez insisted that Miller receive a “co-director” credit with him because he considered the visual style of Miller’s comic art to be just as important as his own in the film. However, the Directors Guild of America would not allow it, citing that only “legitimate teams” could share the director’s credit (e.g. the Wachowski Brothers). Rodríguez chose to resign from the DGA, stating, “It was easier for me to quietly resign before shooting because otherwise I’d be forced to make compromises I was unwilling to make or set a precedent that might hurt the guild later on.” Unfortunately, by resigning from the DGA, Rodríguez was also forced to relinquish his director’s seat on the film John Carter of Mars (2006) (at the time “A Princess of Mars” after the book on which it was based) for Paramount Pictures. Rodríguez had already signed on and had been announced as director of that film, planning to begin filming soon after completing Sin City.

Sin City was a critical hit in 2005 as well as a box office success, particularly for a hyperviolent comic book adaptation that did not have name recognition comparable to the X-Men or Spider-Man. Rodríguez is consequently in pre-production for a sequel, Sin City 2, which will be based on the Sin City story A Dame To Kill For and is scheduled for release in 2007. He has stated that he is interested in eventually adapting all of Miller’s Sin City comic books. There is an announced Sin City 3. Rodríguez also released The Adventures of Shark Boy and Lava Girl in 2005, a superhero-kid movie intended for the same younger audiences as his Spy Kids series. Shark Boy & Lava Girl was based on a story conceived by Rodríguez’ then 7 year old son, Racer, who was given credit for the screenplay. The film was not a major success, having grossed 39 million dollars at the box office. No new 3D projects have been announced by the Troublemaker group, even though a mini-boom in polarized digital 3D films is coming from major studios in 2006.

Since 1998, he has owned the film rights to Mike Allred’s off-beat comic Madman. The two have hinted at the project being close to beginning on several occasions without anything coming of it. While each has remained openly ethusiastic about the movie, other projects have been done first (Allred was instrumental in connecting Rodriguez with Frank Miller, leading to the production of Sin City). In 2004, Allred–while promoting his comic The Golden Plates– announced that a screenplay by George Huang was near completion, as well as that he and Rodriguez planned to shoot soon Rodriguez has long stated that he would like for Allred to co-direct, the same way Frank Miller did for Sin City). In March 2006, it was announced that production on Sin City 2 would be postponed. Allred announced at the 2006 WonderCon that production would likely commence on Madman the Movie in Spring of 2006.

He has a series of “Ten Minute School” segments, explaining his use of digital cameras and good cheap special effects to make movies profitable and even revealing his recipe for “puerco pilbil” based on the real “cochinita pibil”. A strong supporter of digital filmmaking, Rodriguez was introduced to this by none other than George Lucas who personally invited Rodriguez to the use of digital cameras at his headquarters.

Rodriguez has five children; Rocket, Racer, Rebel, Rogue, and Rhiannon. He announced in April 2006 that he and his wife Elizabeth Avellan have separated after 16 years of marriage.