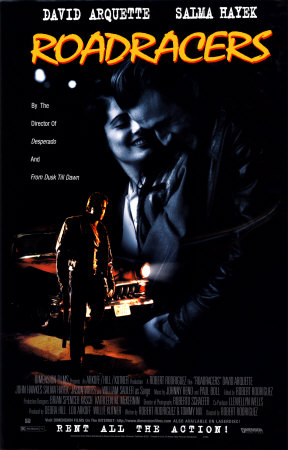 More On This Film:

Roadracers is a 1994 made-for-television film directed by Robert Rodriguez, his second feature film following the success of his 1992 debut, El Mariachi. The film originally aired on Showtime Network as part of their Rebel Highway series that took the titles of 1950s-era B-movies and applied them to original films starring up-and-coming actors of the 1990s (including the likes of Alicia Silverstone and Shannen Doherty) and directed by established directors such as William Friedkin, Joe Dante, and Ralph Bakshi. Rodriguez was the only young director to participate in the series.[1] The series was produced by the son and daughter of Samuel Z. Arkoff, the co-founder and producer of American International Pictures (AIP), the distributor of the films this series takes its titles from.

Robert Rodriguez's take concerned a rebel named Dude (David Arquette) who dreams of leaving his dead end small town and becoming a rockabilly star but gets caught up in a nasty feud with the town's local sheriff (William Sadler) and his son (Jason Wiles). Salma Hayek plays the Dude's girlfriend.