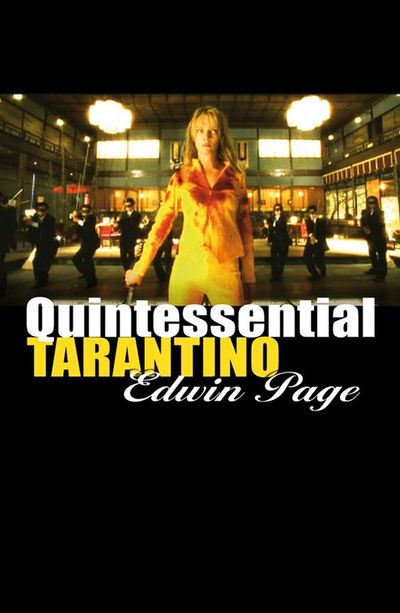 When I wrote a review of Holm's Pocket Essential Tarantino a few months back, I was positively surprised about the new aspects and ideas he brings to the discussion going on in literature about Quentin Tarantino. Having read Quintessential Tarantino now, written by British scholar Edwin Page, it seems like there are still authors who restrict themselves to very one-dimensional analysis. I want to quickly do a rundown of what I liked about this book, then I want to sum up my main points of criticism. If you want to read a quick verdict or see if I would recommend this book, take a look at the very last paragraph.

Page clearly comes from the literary sciences, that echoes in his analysis of Tarantino's films, which is the main content of this book. This book is no biography, no interpretation of his life and work, it is a film-by-film analysis, driven by Page's look into Tarantino's style, post-modern aspects in his films and reoccuring patterns. The book does a great job in going through each of his movies pointing out remarkable aspects of them. This includes pointing out Tarantino's trademark styles, his casting choices, narrative structure or film references, which gives the book a very linear structure that is easy to follow and allows for the book to serve as a look-up piece as well.

The text of the book itself is kept very simple. Although Page tries to employ a mode of literary analysis, which does incorporate a certain vocabulary, his book is very easy to read and easy to understand. This is helped by sentence structure and language. His analysis of the films comes from a mere intrinsic perspective, which helps fans of the films to understand his arguments, because that is the perspective of the audience.

Where the book clearly doesn't succeed at all, is, as above mentioned, the lack of originality. A run down analysis of Tarantino's films has been done before. Page doesn't contribute anything new to the discourse, except maybe provide an anchor in the way his films can be analyzed. He goes through each film in the same way, repeating himself a thousand times, while at the same time often making logical mistakes, ommiting important aspects or ignoring them where they seem to be obvious to the experienced Tarantino afficionado. The language, which may be a plus for some readers, is a bit too simple and his argumentation is too one-sided. After a few pages it comes clear that page is a fan himself. He doesn't distance himself enough from the work he is analyzing. He doesn't question, he praises. And the total exclusion of extra-textual aspects, biographic context and the discourse about violence, language or plagiarism - aspects Holm tackles to a great extent - makes this book quite boring and quick for anyone who has read some books before this one. This book clearly doesn't look deep enough and comes up with nothing new.

Verdict: Page wrote a Tarantino book in the style of early Tarantino books. He takes a look at Tarantino's films, without looking at Tarantino. The book is definitely great for people new to his films or people who know his films but haven't read anything about them yet. The fact that there is nothing excitingly new in this book about the person Tarantino or the work he does, makes the book a no-no for people familiar with the debate going on. The book might be a good addition to Bernard or Woods, but pales in comparison to the tiny Pocket Essential, which drops a gauntlet onto the Tarantino literary discourse in far less pages than Page needs to just describe his films.

Who should buy this book? Everyone who hasn't read the indispensible trio Bernard-Holm-Woods yet, or everyone who just wants to read a simple, fast and uncomplicated analysis of his films, because the book just is nothing more than

written by Sebastian Haselbeck (no unauthorized copying or republishing without permission)