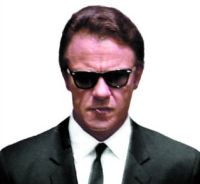 His real name is Lawrence (Larry) Dimmick. The character is cool, calm, and collected through most of the film; he acts like a professional. Originally from Milwaukee, Minnesota, he's brought on Joe Cabot's current jewelry heist through prior association. Yet, he has reserves about doing it, because he feels he's jinxed. The last job he worked on, almost got him pinched by the cops. Cabot's current job aligns him with a set of characters with color code names, and Dimmick assumes Mr. White.

As Mr. White, Dimmick becomes a sort of surrogate father to young recruit Mr. Orange as they plan the job over a few days. The two become so close that he lets detials of his personal life slip like his hometown and his specialty as a criminal. When Mr. Orange gets shot after their escape of the heist gone wrong (due to a possible undercover cop in their midst), their bond leads Mr. White to want to bring Mr. Orange to a hospital. It, alas, never comes to pass, as they are stuck in the warehouse rendezvous point for the majority of their time awaiting the arrival of Joe Cabot to sort things out. While left alone with the psychotic Mr. Blonde who's about to kill an abducted LAPD officer, Mr. Orange kills him, and White then defends Mr Orange to the end against his old friend Joe Cabot and his son Nice Guy Eddie. Mr. White's luck runs out, as after being shot in a crossfire of a Mexican Standoff between himself, Joe, and Nice Guy Eddie, Mr. Orange finally reveals that he has indeeed betrayed him. In the end, the cops bust in, and in a true act of honor among thieves, Mr. White puts Orange out of his misery - ultimately causing the cops to open fire on him. His job was to take the manager into the back, and make him give him the diamonds, with the help of Mr. Pink.