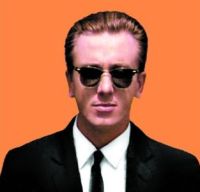 Mr. Orange is the alias of an undercover police officer named Freddy Newandyke who is assigned to infilitrate Joe Cabot's latest jewelry heist. In the midst of this heist is a ragtag team of ex-felons including Mr. White (revealed to really be Larry Dimmick), whom they also have a sheet on. Conflict of interests arise when Mr. Orange has a father-son relationship with Mr. White. This is sold in the first scene after the credits where Mr. White talks to Mr. Orange like a child in the back seat, consoling him about his pain. Freddy's assistant and only connection to the real world is undercover officer Holdaway.

While planning the robbery, Mr. Orange earns the trust of Mr. White. During the botched heist, the duo end up at the rendevous point in an abandoned warehouse where Freddy is literally bleeding to death due to a gunshot wound to the stomach. Mr. Orange suggests to Mr. White that he should just drop him off at a hospital and that he wouldn't rat on him. White actually considers it, knowing Orange knows his real name and where he's from. Mr. Pink advises against it, seeing how he suspects a cop in the group anyway. He is shot in the head by Mr. White at the end of the movie. His job in the heist was to stand by the door, and make sure nobody went in or went out.