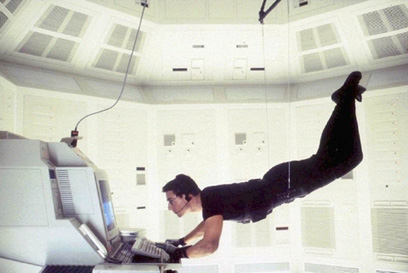 Ever since first viewing Brian DePalma's big screen adaptation of the classic 1960s TV spy show, I've held it high regard. Alot of viewers of the film seem to be confused by it and have ignoring the fact it really is a modern masterpiece of film. DePalma's visual techniques and the spy genre come together perfectly. NOONE tells a story visually like DePalma can (not even Spielberg or Scorsese). His camera is his paintbrush and his canvas is the silver screen. The Mission Impossible screenplay script was co-written expertly by Robert Towne and David Koepp, two of the best screenwriters in Hollywood.

In the 60s Mission Impossible TV program, Martin Landau starred as IMF super agent Roland Hand and Peter Graves played Jim Phelps, his main IMF contact. You may remember the iconic opening sequences where Hand would receive his debriefings on a hidden tape recorder and directly after, Phelps would state "this message will self destruct in 10 seconds...) In this version, the lead IMF agent is named Ethan Hunt (Tom Cruise) who is sharp as a razor and all business. Tom Cruise's own shrewd personality fit like a glove with his persona as Hunt. Jim Phelps is played by the great Jon Voight (Deliverance) who really is a good friend and father figure for Hunt.

In the opening of the film, we join the modern IMF team on a secret mission in progress. In the first few minutes we get an inside look at exactly how they operate. IMF technical expert Jack Harmon (Emilio Estevez) watches the procedure taking place on a computer monitor. The figures on the monitor don't look familar. We see a gruff Russian man looking like he's trying to get information out of some low rent criminal and theres a girl passed out on the bed. After getting the info he needs, the thug is given a shot in the arm knocking him out. The entire background of the room is taken apart and the Russian man pulls off a mask: its Ethan Hunt! The beautiful girl on the bed is actually IMF Agent Claire Phelps (the beautiful Emmanuelle Beart). As she comes to, she sees Ethan standing over her. In a quiet voice she asks "Did we get it?", Ethan replies: "We got it": Cue the opening credits.

The thrilling Mission Impossible fanfare (composed by Lalo Schifrin) begins and we see clips from the films many visually stunning sequences to follow.

After his IMF team (including Kristen Scott Thomas and Ingeborga Dapkunaite) are all mysteriously knocked off during a mission, Ethan Hunt is the only one left alive and IMF Chief Kittredge (Henry Czerny) immediately suspects Hunt as being the person behind the killings. Hunt is in shock, but he meets with Kittredge at a restaraunt called the "Aqvarium" which houses a large fish tank as its main attraction. While there, Kittredge accuses Hunt openly of being behind the deaths of his team and the problems that IMF is having regarding "blowback". He also lets Hunt know that theres someone who's leaking secrets to a contact called "Job 3:14". Hunt knows he's in deep trouble, but hes also innocent. His reaction to Kittredge's accusations becomes literally explosive.

After "leaving" his meeting with Kittredge, Hunt returns to his flat in the city. He immediately breaks a lightbulb and sprinkles the shards on the ground so he will be able to hear someone coming down the hall. He begins to drift off to sleep...DePalma channels some kind of giallo technique here as he blurs Hunt's dreamstate with reality. Hunt hears a crunching of the glassbulb shards, each step making him more aware, but when he sees Jim Phelps appear in the doorway bloody and half dead, he begins to freak. As a hand reaches out for Hunt, he suddenly wakes up! Its not Jim, but his wife Claire! (I love how DePalma shoots this sequence!)

Since Hunt is now a wanted man, he decides to take things all the way. With Claire now in tow, he recruits two disavowed IMF agents: a computer hacking genius, Luther Stickell (Ving Rhames) and Franz Krieger (Jean Reno) a crazy thug (reccomended by Claire), to help him break into IMF Headquarters at Langley to heist the official IMF Noc List (a list holding the codenames of the Disavowed IMF Members). When this list is paired up with a second disc holding the real names (which was stolen in the opening mission), whoever owns it will be very rich. Hunt plans to sell the first Noc list disc to the mysterious "Max" and then find out who the mysterious "Job" really is.

The Noc List heist is one of the best sequences in the film as Hunt and Krieger climb through the buildings air ducts to the highly protected computer room where the Noc List is stored. The tension mounts more and more as Hunt is lowered into the room on a wire rig. He must stay off the floor and evade detection. The rooms temperature is monitored as well, if it goes over a certain temperature, game over. Throughout the film Jean Reno reminded me alot of of Tuco (Eli Wallach) in The Good The Bad and The Ugly (1966), especially in one of the scenes as the IMF team leave the Noc List Heist in the CIA Building at Langley which mirrors a memorable scene in The GBU where Tuco gives a wry smile.

DePalma is known to love shooting train stations in his films. Well with M:I he takes it up about 12 steps and films a brilliant action sequence on a train. When I watch this, I can't help wondering how the hell they filmed it. Its truly breathtaking. The last shot in this big finale is just superb.

In the end, what I love most about Mission: Impossible is how DePalma uses his visual techniques to help heighten the film as it unfolds. I think his work in this film is some of his very best. Everything he does pays off in the best way and he truly takes the spy film to a new level with his ideas and direction. I'd love to see him make another film in this genre!!