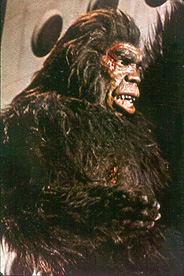 Following up on previous successes like "Switchblade Sisters" and "The Beyond," Rolling Thunder hopes to once again offer up a wild late night date-movie alternative. As to the film itself, "Mighty Peking Man" aims to please on no uncertain terms, featuring a giant Ape, lots of destruction and a half-naked blond model. - indiewire.com

In the 1970s, Shaw Brothers Studios was the greatest producer of classic martial arts films, but during that time they also dipped into other genres like sci-fi, horror, comedy and dramas. Mighty Peking Man was the Shaws' cover version of King Kong and the Japanese Toho/Toei Monster movies with a dash of Tarzan done in their own incredibly entertaining way.

A group of exploiteers have heard about a legendary creature living in the Himilayas called "The Mighty Peking Man". They decide to try to find the monster so they can make lots of money, but they need to find someone to head their exploration. Their first choice is a young guy named Johnny Meng (Danny Lee). Johnny has just broken up with his girlfriend Lin, after finding her with his own brother, a successful TV producer. Johnny accepts the challenge and he and a group of adventurers set off into the mountains to find the Mighty Peking Man.

When the group get to the small village where the Mighty Peking Man was originally seen, they find noone there, but suddenly a large stampede of elephants comes through the village and we see the natives are hiding out to stay safe. The elephants violently trample several of the people. Later, as the group moves on, a large tiger attacks them from the wood (look out for the two men who jump directly into quicksand: OOPS!) and one of the native trackers wrestles with the animal, Johnny tries to help save the native, but the tiger bites the man's legs right off. The tiger takes off into the woods. This scene is hilarious.

The group bed down for the night, and this is where we find out about Johnny's past and why he is on the exploration. We see a flashback explaining just how Johnny's girlfriend had an affair with his brother Charlie. The next day, Johnny wakes up and finds he's all alone, the others have mysteriously dissapeared. Out of the corner of his eye, Johnny sees a woman running through the jungle. He then chases after her and they finally come face to face. The beautiful blonde woman is Samantha (Evelyn Kraft) and she has been living in the jungle since a young age. After a plane crash, her parents were killed and only she survived. The Mighty Peking Man himself rescued her and gave her food and found a place for her to live. Johnny is amazed and also highly attracted to her. Samantha can't speak English very well, but they communicate good enough. She climbs a tree and picks some fruit for her and Johnny to eat. When Johnny takes a bite of the fruit, he spits it out, but Samantha happily chows down on it. As Samantha eats, a cobra slithers up from behind and bites her leg. Johnny is there to suck out the poison right away. He brings Samantha back to her cave, and Mighty Peking Man comes to their aid dropping a large batch of medicinal leaves down to Johnny so he can mash them up into a paste and rub it into Samantha's snakebite. Soon, Samantha gets better and everythings alright again. This is where we get a really fun 70s style musical interlude complete with slow motion and a great tune called "Could It Be Love?". Samantha and Johnny frolick through the jungle with her tiger and have a great time. 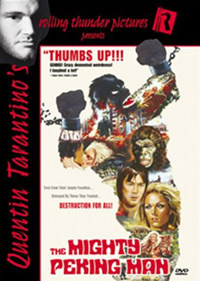 Johnny decides to head home to Hong Kong and bring Samantha with him. Now that he's found The Mighty Peking Man, he knows that he'll be regarded as a big hero when he gets back. He contacts his boss (who left him high and dry) and they bring The Mighty Peking Man back on a boat. The Mighty Peking Man is chained up and placed on the deck of the ship. The main exploiteer we can see, is a nasty guy and doesn't care one bit about The Mighty Peking Man, he just wants a big pay day. Johnny is unaware of his true intentions and meanwhile, he gives Samantha a present, A new leather dress to wear. Samantha tries it on, but its uncomfortable for her and she throws it right out the window, preferring to be naked. No complaints there. Johnnys ex-girlfriend Lin happens to be aboard the ship and when Johnny sees her, he forgets all about Samantha. Lin tells him that her affair with Charlie meant nothing, Johnny is turned to putty. Suddenly, Samantha encounters the two and she rushes off in anger.

When the boat finally gets back to Hong Kong, the whole city is in an uproar because of The Mighty Peking Man. Johnny is in the spotlight and he even makes up with his brother Charlie who plans on helping him get plenrty of press for his big find. Johnny is feeling great, but Samantha is now lost, shes out of place in the big city and doesnt know where to go just like the poor Mighty Peking Man. The Mighty Peking Man is being held in a large cage and we find out that he is not feared or respected by any of the people, instead he is being tortured by them. When The Mighty Peking Man spots Samantha being raped by the main exploiteer in a building nearby, he begins to go crazy and rips the chains off and breaks out of his huge cage. He then smashes his hand through the window and tries to grab the fiend, but he gets out with Samantha. This is where we see the films biggest Mighty Peking Man destruction sequence as he smashes the entire city of Hong Kong to rubble. The miniature cityscape is very believable and looks great on screen. This sequence in particular reminded me of one of my favorite "Man In Suit" films, War of The Gargantuas. The films explosive climax takes place at night in a very similar scenario as the 1976 version of King Kong as Johnny and Samantha do everything they can to save The Mighty Peking Man from the evil society that doesn't care about him.

Mighty Peking Man is a gem of 1970s filmmaking, especially since its not a Japanese monster movie, but a Chinese one. It moves at a great pace, and theres lots of fun sequences, dialogue, beautifully shot sunsets and of course Evelyn Kraft in her ultra skimpy jungle bikini which amazingly stays stuck to her body when shes running around, swinging on vines and climbing trees. Mighty Peking Man himself is bizarre looking, in several scenes you can see the actors eyes underneath the unreal monkey mask. Regardless of its silliness, Mighty Peking Man is simply an exciting film to watch.

THE FINAL WORD: Mighty Peking Man is a highly entertaining subgenre film from the Shaw Brothers. Director Ho Meng Hua utilizes all kinds of interesting cinema tricks to create something unique. While some of the FX are certainly not up to today's standards, they work well and provide both laughs and excitement. If you love crazy cult films, Mighty Peking Man will knock your socks off! - Pete R.