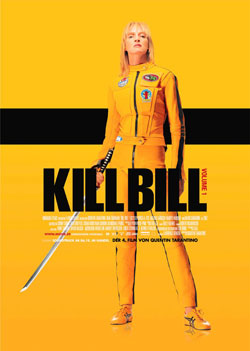 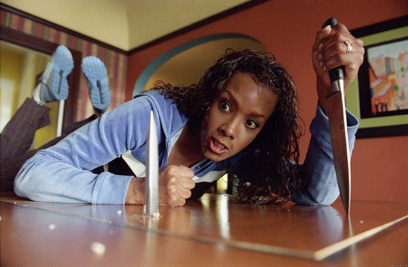 The film opens in black and white. The Bride is shot in the head by a man sporting a handkerchief marked with the name "Bill". Bill is played by David Carradine, despite his face not being shown in the first volume.

The narrative then jumps forward in time as The Bride arrives at the Pasadena home of ex- Deadly Viper Assassination Squad member Vernita Green (played by Vivica A. Fox) a.k.a. Copperhead. She fights Vernita and kills her. The Bride is stunned when she finds Vernita's young daughter, Nikki has witnessed this. 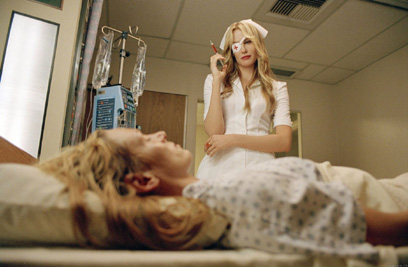 We journey back in time to when Sheriff Earl McGraw (played by Michael Parks) and his number one son Edgar McGraw (played by Parks' real life son James) investigate the scene of The Massacre At Two Pines wedding chapel. Sheriff McGraw discovers that The Bride is in fact still alive after she spits in his face (a motor reflex). NOTE: This could be a reference to the Ozploitation film Patrick (1979) in which the Patrick character has this same reflex.

While comatose in the hospital, The Bride is visited by Elle Driver (Daryl Hannah) aka California Mountain Snake. Elle is also an ex-member of the DiVAS (Deadly Viper Assassination Squad). She is convinced by Bill, who appears to now be her lover, not to kill The Bride in her current state.

The Bride awakens four years after being shot in the head and finds her unborn baby gone. She doesn't have too long to mourn before she is visited by an orderly named Buck and a truck driver. She pretends to be still comatose and finds that Buck has been offering men sex with comatose patients in return for money. She then kills both men.

The Bride takes Buck's keys, a wheelchair and finds his truck, the Pussy Wagon in the hospital parking lot. She attempts to move her temporarily paralyzed legs and thinks about her future opponents.

Chapter Three: The Origin of O-Ren (1) 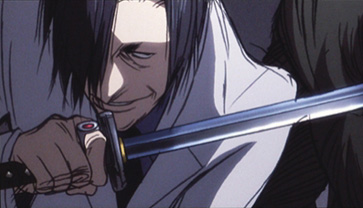 The Bride introduces us to another DiVAS member, O-Ren Ishii (played by Lucy Liu), codenamed Cottonmouth. A flashback of O-Ren's life is shown as an anime sequence. After witnessing the murder of her parents by Yakuza leader Boss Matsumoto, O-Ren takes her revenge at 11 years old, after discovering that Matsumoto is a pedophile. She then works her way up to a very successful career as an assassin and member of Bill's DiVAS.

We rejoin The Bride in the present (13 Hours after escaping from her hospital room) where she finally gets use of her legs back. The Bride hops in the driver's seat of Buck's Pussy Wagon and speeds off...

Chapter Four: The MAN From OKINAWA (5) 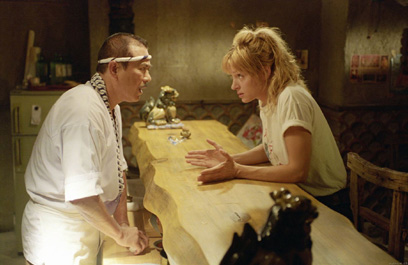 The Bride stops in Okinawa, Japan to convince one of Bill's mentors, Hattori Hanzo (Sonny Chiba), a famous samurai swordmaker to give her one of his prized weapons of death. When she drops Bill's name, Hattori breaks the oath he made decades earlier to never make another sword. Hattori creates his finest sword ever and presents it to The Bride. 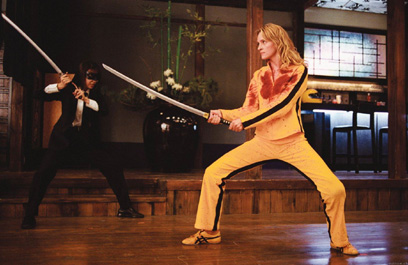 In the final chapter of Volume 1, The Bride makes her way to Tokyo, Japan and stops at "The House of Blue Leaves", the hangout of ex-DiVAS member turned Yakuza leader O-Ren Ishii and her army of bodyguards known as "The Crazy 88".

After an action packed, gruesome swordfight where she single handedly decimates The Crazy 88, The Bride faces off against O-Ren and slices the top of her skull off.

The Bride then takes Sofie with her and extracts information before dropping her off at a hospital. Sofie then informs Bill of The Bride being alive and that she is coming for him and the other DiVAS.

At the end of the film, courtesy of Bill, we find out that The Bride's baby is in fact still alive.