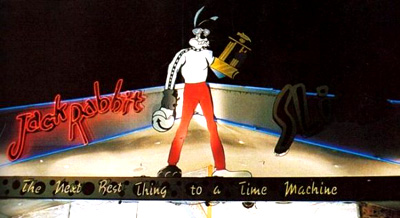 The fifties style theme restaurant Vincent Vega and Mia Wallace go into in the film Pulp Fiction. Later on in the film during The Gold Watch segment, you can hear a radio ad for the restaurant while Butch Coolidge is traversing to get to his apartment. Jack Rabbit Slim's is also mentioned in an ad on the radio in Reservoir Dogs. You can hear it after Mr. Orange shoots Mr. Blonde and the camera pans to the left.

All the waiters and waitresses look like icons from the fifties. We can see Buddy Holly, James Dean, Dean Martin, Marilyn Monroe, Mamie van Doren, Zorro, and Jerry Lewis walking around.

Mia Wallace: "An Elvis man should love it".

Vincent Vega: "...Its like a wax museum with a pulse."