A Film Review By Lance Polland 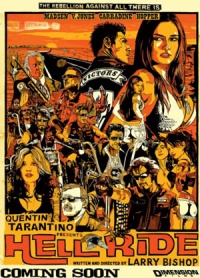 I went to the Hell Ride premiere last night at the Egyptian theater in Hollywood, Ca. I didn’t really know what to expect about this movie since I haven’t seen any advertisements on TV, only the word of mouth that’s been generating since it screened at the Sundance film festival earlier this year. I arrived about an hour early and went to the bar next door and had a couple of drinks, the Paparazzi outside the theater start lining up waiting for the stars to arrive. 30 minutes later I finished my last drink and headed back out the theater, as I was walking past the photographers someone yells out, he’s here and the flash bulbs start going off. Larry Bishop, (The Savage Seven and Kill Bill: Vol. 2) has arrived. Bishop is the movie’s writer, director and star of Hell Ride; he strolls past the paparazzi’s posing for pictures and greeting the crowded fans that have been waiting to see him. I hurry inside the Egyptian theater and get my seat eagerly anticipating the movie, within 20 minutes the auditorium fills up and the lights go out, the movie begins…

5 minutes in to the story and I realize this movie is going to be an off the hook throwback to the 1970’s drive-in exploitation cinema! From the opening title sequence to the closing end credits I was in pure baddass biker heaven, this sexploitation biker fest fueled with so much sex, drugs and violence was enough to make any Eli Roth fan blush. Hell Ride has more T&A than a late night paid cable movie, the boobs and beer effect goes a long way most of the time, fortunately for Bishop he knows how to weave a story compelling enough to keep you on the edge of your seat while satisfying the audience with gratuitous nudity. The basic story is about a biker named Pistolero (played by Bishop) the head of the Victors. Pistolero discovers his old lady Cherokee Kisum (played by Julia Jones) was murdered by the leader of a rival gang the 666er’s. 32 years later the 666er’s ride into town searching for a key, soon Pistolero gets sold out by one of his own members and the 666er’s begin killing the Victors one by one. Pistolero heads out looking for revenge, while his gang makes other plans. The Gent played by Michael Madsen (The Doors and Kill Bill: Vol. 2) is ultra cool as a quick gun slinging booty chaser. The Gent is the One of the Victors most trusted member and also Pistolero’s right hand man. Eric Balfour (The Texas Chainsaw Massacre) has the role of Comanche, the young baddass biker with a past. The comradery between the lead actors would make you believe they were as close of friends off camera as they were on, especially Bishop and Madsen. Hell Ride has some really cool moments throughout, when retired Victor member Eddie 'Scratch' Zero played by Dennis Hopper (Easy Rider and True Romance) pops up in the most key scenes, one can’t help notice how brilliant he can be with the right character. Other classic moments come from The Deuce played by David Carradine (Kill Bill: Vol. 1 and Kill Bill: Vol. 2) steals every scene he’s in. One small but effective role is ‘Goody Two-Shoes’ played by Michael Beach (First Sunday and True Romance) who always delivers a solid performance in any movie he is in. Last but certainly not least is the incredibly beautiful Leonor Varela (Blade ll) as Nada, Pistolero’s current main squeeze. She is mesmerizing to watch on the screen, the raw sexy dialog that Bishop has laid down makes her character seem more believable. Nada’s fowl mouthed naughty tough girl attitude gives sex appeal a whole new meaning. 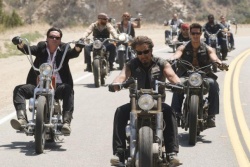 It was refreshing to see Bishop’s eye for detail, from the dingy bars and dirty hotel rooms to the tattoos on the actors. One actor especially is Vinnie Jones (X-Men: The Last Stand and The Midnight Meat Train) who plays the main villain and head of the 666ers, Billy Wings. His character is named after all the colored wings he’s had tattooed on his body, I can’t tell you why he has the tattoos so you’ll have to watch the movie- The payoff is worth it.. The cinematography was right on the money, easily some of the best camera work I’ve seen in a long time. The camera captures the bike riding scenes like a updated Easy Rider, and the stunts are top notch. Hell Ride was Executive Produced by Quentin Tarantino, a longtime Bishop friend. At the Q&A that followed after the movie director Larry Bishop said that Quentin had done some editing on the film to amp up the pace a little. It’s easy to see that Bishop has a good handle on tone and style when it comes to the rugged action and more violent shots of mayhem. Although Hell Ride is not an Oscar worthy movie, it’s defiantly an MTV best picture nominee for sure.

I had a chance to spend a few minutes with Larry Bishop and Michael after the premiere, Bishop told me he was excited at the response Hell Ride was receiving and hopes to do another one. Madsen said that filming was a blast and that he would love to do another film with Bishop and crew. I hope that Larry Bishop continues making these great exploitation grind house style films for years to come, the film opens in limited release August 8th, 2008

The author is a co-writer/director of the upcoming film Slices, to hit DVD later this year 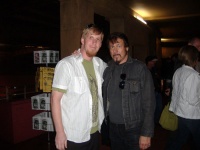 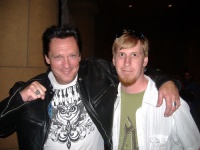