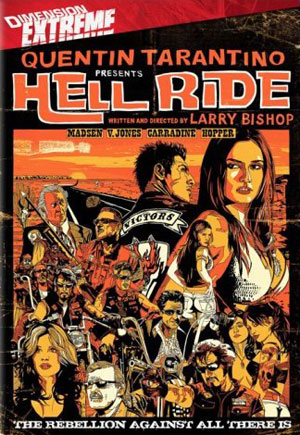 After having to put up with the imported Swedish DVD that I reviewed a few weeks back, which was insanely overpriced (but a steelbook nonetheless), I am finally holding the US release (from Dimension Films / Genius Products; part of their "Extreme series") in my hands and I can finally dive into some of the very promising extra material. The movie review part of this article will therefore be a bit shorter and I'll focus more on those goodies instead, letting you know at the end of the page whether you should be picking this up or not.

Pistolero (Larry Bishop) and his Victors, a biker gang, are cruising around the south west. Their rivals, the 666ers, killed his girls back several years ago, Cherokee Kisum (Julia Jones). Not only does he want revenge now, he also wants to make sure her last wish is granted, which involves a little kid and a safe deposit box that needs three keys to open. He's got one. His newest gang member Comanche (Eric Balfour) has one, and he'll find out where the third key is and where it all comes together. But there's an internal power struggle in his gang going on, and he needs his guy The Gent (Michael Madsen) and veteran biker Eddie Zero (Dennis Hopper) to have his back while he's unravelling the past, getting into trouble with Billy Wings of the 666ers (Vinnie Jones) and along the way having fun with hot chicks and getting some information from Nada (Leonor Varela), a horny goddess that we don't know yet which side she's playing (or doing, for that matter).

Hell Ride is Larry Bishop's quest to fulfill his own destiny, at least if you ask Quentin Tarantino. He made sure this movie gets made, and Larry wrote it as a novel, shooting it on a shoestring budget, tossing in lots of A and B listers, plenty of bare skin and foul language. The result is a pretty cool biker flick with great performances, an amazing soundtrack and great visuals. But the result is too short. And that's why to many, the film will appear a bit too shallow, hurried or what have you. It's missing about 20 minutes of depth and elaboration, especially when you're like me and want to know more about Nada, or who the fuck is Goody Two-Shoes, where does he stand, what's The Gent's story etc, there's just too much left unanswered to give this movie two thumbs up, but one thumb up is still better than most of the crap coming out of the "Bruckheimer School" of Hollywood. So kick back and enjoy this chopper opera, a definitely entertaining movie with lots to discover.

Dimension/Genius and Larry Bishop really deliver on this one. In terms of video and audio quality, there's no room to complain. First I thought the PAL DVD I also have looked a bit better but upon direct comparison there's really hardly any difference. The movie looks quite sharp considering the artistic style of the visual presentation and the sound is decent, you'll hear the roaring of the engines and the great soundtrack well if you have that sort of equipment. For cineasts with deep pockets you might wanna check out the BluRay version of this though.

First up is a little “Making of” that runs just short of 10 minutes and is basically a little interview and footage montage that tries to get to the “what the movie is” question. Larry, Laura, Michael and Leonor talk a bit about how the movie come together, some aspects of the film such as the sexuality and Tarantino's involvement are addressed. Alltogether – just like the movie – way too short, but interesting.

“the babes of hell ride” is another short bit about the most central aspect of the film, the ladies. And oh boy there are lots of them, and just about the hottest ones they could find. Laura, Leonor, Cassandra... all stunning beauties that make the movie as sexy as it is. Just as, or more essential than...

...“the choppers of hell ride”. Now the babes part got your juices flowing, but this one is gonna make your arm hair stand up. What a nice selection of choppers, custom made, restored, genuine hell rides. They really wanted to get the bikes part right and I think the movie did a great job at doing this, even though most of the audience will probably not have the knowledge to make a judgment, but it certainly feels right, and you can see how much effort they've put into those machines.

“the guys of hell ride” really takes its time exploring the main characters, with lots of nice interview bits and backstory. It might be the best of these featurettes. And sheeesh, Dennis Hopper, fucking legendary, mate.

Michael Madsen's video diary is another 10 minute bit, yet a more personal look at the production and some of the experiences on the set, with the director and the other actors. Madsen is of course a legend in his own right and I thought it was particularly cool of him to do this, even though it's just as short as the other videos.

Taken altogether, these short clips really give a nice picture of what it was like shooting the film and being with all these great people. I know I like to bitch about this, but add the runtime of these clips up and you're not close to the runtime of what I'd expect a making of feature to be, but life sucks sometimes (sometimes even a lot). At least they put lots of work into those and they are all worth watching. To round it off there's the red band trailer for the film which really kicked some major ass when it hit the net a few months back, even though for many many people the film really couldn't live up to it.

Larry and Scott's commentary is for those who like to dig even deeper and discover more about the film. It is a really comfortable commentary track, with easy to listen to audio and really lots of information. It is a very personal, very detailed, and very committed track, one of the better ones I've listen to in a while – even though I haven't listened to many ever since I started this thing called university. They stick pretty much to the specific scenes and Scott's insight is especially interesting, not just from the point of view of someone interested in film making but also because it makes it not a one-man show. Everyone knows how Larry's heart is into this project but it's great to see how professional he's about it and if you watch the movie you know how beautiful the cinematography is and so it's great to hear from the person who's responsible for how great the movie looks like. Did I mention the ladies also are somehow responsible for that? Oh yes, anyways. There's not very much more about the characters and the story to find out, I was sort of hoping for that – as you know I am kind of disappointed at how fucking short the movie is. What the audio commentary really does best is show how interesting of a person Larry Bishop really is. He knows a lot, he's very committed and he knows how to talk about this without sounding boring. This commentary is truly excellent and will entertain fans of the film, fans of film and fans of cinema art at the same time. Filmmaking, acting, cinematography, sexuality, personal experiences, it's all in there and it adds a lot to the movie.

Hell Ride is a movie that will be remembered for the three Bs, for the bad reviews it received mostly and for an amazing soundtrack that so far hasn't received a CD release (and might never). I loved the movie for what it is, namely an ass-kicking motorcycle flick with great cinematography and music, stunning beauties and exploitation movie feeling. As I've stated numerous times before, I think the movie is way too short, at least 20 minutes too short, and that's also why it got so bad reviews. The film is like fast forwarding through a story that should've paused a lot more to explain more things, to give the characters more depth (Nada, Eddie, etc..) and thus make the film a more coherent, less confusing feel. And that's where the DVD comes in. I was hoping at least for some deleted scenes. But no. I mean an extended cut would have been amazing, but at least deleted scenes would have been a nice cherry on top of this otherwise great DVD release. Fans with deeper pockets will add this on BluRay to their high def equipment, but the DVD also delivers fine audio and video of this film. The extras are a set of great little featurettes and a truly great audio commentary.

Get this DVD if you liked the film, get it for the people involved and if you wanna know more about it. The DVD doesn't make the movie any better if you're thinking about it's negative aspects, but if you look beyond that, it might be the right DVD for you. Pop it in, have friends over, order a pepperoni pizza with lots of crushed peppers, a 12 pack of American beer (no matter if recently bought by the dutch or not) and have fun!

Thanks to Genius Products for providing the DVD