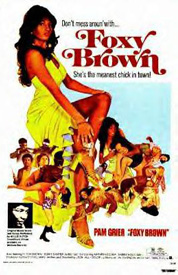 In this follow up to Jack Hill's 1973 Blaxploitation classic Coffy, Pam Grier stars as Foxy Brown, another badass babe thats out for revenge. Foxy Brown was originally meant to be a sequel to Coffy, but Hill decided to create a new character for Grier to play.

The story begins as we see Link (Antonio Fargas) being trailed by some crime hitmen who are after him for not paying on a bet he made. Link is Foxy's brother and hes a bad seed. Link tries to get out of his situation by calling up Foxy in the middle of the night and telling her to meet him. Foxy shows up right before the hitmen are going to kill Link. Foxy crashes her car into them and one hitman ends up on her hood. Well Foxy aint playin around. She floors the car with Link hanging on just like the hitman. Foxy speeds towards a pier and slams the brakes. The hitman flies into the water.

Foxy brings Link back to her place and they have a conversation about what Link is going to do about his life. Link explains to Foxy that hes a black man and if you wanna be successful you have to do whatever it takes. Link is a drug dealer and Foxy knows hes just headed in the wrong direction. Foxy lets Link stay with her until he figures out his next move. But knowing Link, hes not going to be working at the local grocery store.

Foxy's boyfriend Michael (Terry Carter) is a police informant who had to get a facial reconstructive surgery because he needs to protect his identity from those who want to harm him. Foxy goes and visits him in the hospital and in a funny scene, while Foxy and her boyfriend are making whoopie, they get interrupted by a nurse who needs to give him his daily spongebath. He gets to leave the hospital after the federal agents tell him to lay low for awhile. But soon after Foxy and him get to her house, Link is introduced to Michael and he gets suspicious that he might be the police infomant who was believed to be killed. Link puts 2 and 2 together and realizes that the only way he'll be able to get back into the drug selling biz is if he rats out Foxy's boyfriends new identity to the gangsters who are looking for him.

The crime ring is run by Ms. Katherine Wall (Katherine Loder) an evil madam and drug lord. She gets word that Foxys boyfriend is indeed the police informant and Ms Katherine sends her hitmen to kill him. Just as Foxy and Michael are getting ready to go on a vacation, he is spotted by the hitmen and he gets shot. Foxy is devastated. But she knows who told his whereabouts. Her own rotten brother Link.

Link is in his girlfriends apartment cutting up the coke hes going to sell, since hes back in business. Suddenly the doorbell rings, and its Foxy. Foxy explains that Michaels been shot and to please open the door, Link relents but then agrees. WHAM!! BAM!! Foxy barges into the pad by herself and starts blasting. She knows Link set Michael up and shes not happy. Foxy tells Link she wants the name of who killed Michael or else he's a dead man. Link gives up the name of the mastermind behind the crime ring. Foxy tells Link he better get outta town ASAP.

Foxy goes undercover as a hooker named 'Misty Cotton'. Foxy puts on the charm as Misty and meets Katherine Wall at her office. Ms. Katherine is impressed by Foxy/Mistys attitude and hires her as a high class call girl. Her first job is to take care of a client: Judge Fenton (Harry Holcombe). Who in return will help Ms Katherine's friends get out of going to jail. With the help of another call girl named Claudia (Juanita Brown), Foxy gets ready to get back as Ms Katherine by messing up her business. Foxy messes with Judge Fenton and embarasses him in the hotel in front of a group of women.

Ms Katherine gets word of this and she sends her thugs out to find Foxy and her friend. Claudia is now also in trouble for aiding Foxy in her plan, so Foxy wants to send Claudia off with her estranged husband and child to someplace safe. Before she can bring her to the airport, Claudia decides to goto a local bar. Only this isnt a regular bar. Its a lesbian hangout. These ladies try to pick up Claudia but she says shes not interested. Foxy comes into the bar and spots Claudia. She tells Claudia she has to go, but the lesbians interrupt and tell Foxy, shes not going anywhere. All hell breaks loose as Foxy proceeds to kick their asses around the room. Another great Pam Grier catfight!!

As Foxy and Claudia try to get outta there, they are spotted by Ms. Katherines hitmen who are looking for Foxy. They chase Foxy and Claudia and they grab them, not before Foxy cuts one of the thugs with a broken bottle. Foxy gets captured and sent to a heroin shack out in the country. Its run by 2 fat hillbillies who tie her up and rape and drug Foxy. After waking from her drugged stupor, Foxy spots a razor blade on a table nearby. She uses her tongue to pick up the razorblasde and cuts the ropes binding her to the bed.

In a great escape sequence Foxy, sees a tank of gas outside the shack and while noones looking she siphens gas into a container, she also makes a weapon out of clothes hangers. When one of the fat hillbillies comes in, she scratches his face with the clothes hangers and when the other hillbilly hears him screaming, he runs in, Foxy then throws the gas on him. Foxy lights him on fire and bolts outta there as fast as she can. BOOOM!!!! Thats the end of those scumbags!!

In the climactic ending to the film, Foxy Brown joins up with her friendly neighborhood black task force. They are a group that gets rid of all the pimps and drug dealers in the area. Foxy convinces them that they need to help her. She can get her revenge on Katherine Wall and they can help bust up the drug ring at the same time. They agree to help Foxy and set out to get rid of Ms Katherine and her thugs. Look for Jack Hill regular Sid Haig in a cameo as the airplane pilot Foxy meets.

Pam Grier shines once again as Foxy Brown. Its another excellent Exploitation film by Grindhouse auteur Jack Hill. He creates a great atmopshere and his snappy dialogue and fun characters are really some of the best in the 70s Grindhouse era. A highly rewatchable film as well.

An excellent follow up to Coffy. Foxy Brown is an iconic character from the Blaxploitation genre and is one of the classic female empowerment films from the 1970s. If you got creamed by Coffy, you'll go crazy for Foxy!