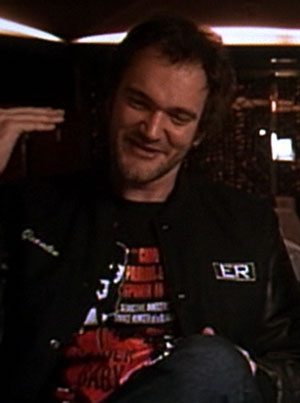 We all know perfectly well how it starts. There’s usually someone being hauled into the ER, bleeding like a stuck pig, and somebody running round in shock telling the doctors what happened, while a bunch of guys in green srubs yell medical terms at nameless extras. At the same time, you have some pediatrician trying to patch up his life and some kid simultaneously, while some intrigue among the hospital’s leadership is cooking up and someone somewhere screwed up big time, and is scared shitless to lose this underpaid overworked job in a place that saves lifes but goes unnoticed in the pulsating city that is Chicago. That’s Emergency Room, the most successful medical TV show on earth. Guest directors are an old story in the TV show business, and in 1995 Mr Quentin Tarantino, fresh off the success of Pulp Fiction, jumped into the director’s chair on this one, directing an honestly magnificent episode of this show with the title Motherhood. The episode boasts the usual intertwined stories of bleeding gangsters, relationship trouble, family drama, pregnancies, drug abuse and forbidden love. What makes this episode so interesting to Tarantino fans, be they ER fans at the same time or not, are all the QT trademarks that one can spot through the episode.

Dr. Susan Lewis (SHERRY STRINGFIELD) ends up delivering her sister's baby girl. Despite Chloe's (KATHLEEN WILHOITE) abuse of her body during her pregnancy, the baby seems healthy. Lewis is relieved that Chloe and the baby will go live with Chloe and Lewis' parents. Unfortunately, their mother, Cookie (VALERIE PERRINE - "Superman"), decides that this is not a good idea and insists that Lewis make other arrangements.

Meanwhile, Dr. Mark Greene (ANTHONY EDWARDS) treats a young girl, Joanie, who shows early signs of heart trouble that may require open heart surgery. Greene offers a sub-I internship in the ER to Carter, who declines the offer in favor of a sub-I in surgery with Dr. Peter Benton (ERIC LA SALLE). Unfortunately, Carter later learns that Benton accepted another candidate for surgery instead. Carter considers telling Greene that he's changed his mind, only to discover that Greene found someone else.

While Taglieri and Hathaway's bickering about their wedding worsens, Diane Leeds (LISA ZANE) and Dr. Douglas Ross' (George Clooney) relationship becomes increasingly serious. However, when Diane asks Ross to move in with her and Jake, Ross gets scared and retreats to his former lover, Linda Farrell (ANDREA PARKER). Diane finds the two of them coming out of his apartment together. She leaves angrily after Ross apologizes, admitting the truth.

Finally, Benton tries to save a teenage boy impaled by an iron bar and later operates on two feuding female gang members. In the midst of this busy day, he learns that his mother has died. He finds solace with the married Jeanie Boulet (GLORIA REUBEN), and the two finally share a kiss.